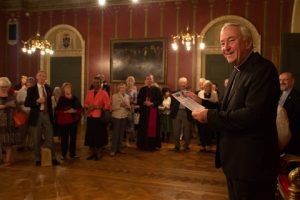 The leader of the Catholic Church in England and Wales Cardinal Vincent Nichols has said that caring for seafarers is “important for the wellbeing of the country”.

“An astonishing percentage of the things sold in our shops in the UK arrives by sea, underlining our dependence on those who work on these ships. To care for them is a profoundly Christian thing to do. It is also very important for the wellbeing of the country,” he said.

Cardinal Nichols was speaking at a reception organised by seafarers’ charity Apostleship of the Sea (AoS) at Westminster Cathedral on September 22nd.

Speaking about AoS’ work, and remembering his visit to Tilbury Docks in June 2015, the Cardinal said, “I must admit what I saw of the work of the chaplains at Tilbury was enormously impressive.

“For many of the ships, [the support from port chaplains] is hugely important in terms of seafarers’ religious belief and practice. Really this is great work that goes on.”

AoS has port chaplains in Tilbury as well as in 40 other ports up and down Great Britain who visit seafarers on board their ships to offer pastoral and practical support.

Cardinal Nichols recalled growing up on the north side of Liverpool, and how the Apostleship of the Sea was very much part of his family’s Catholic awareness.

“As a boy, one of the things that used to enthral me was seeing the big ships leaving the port of Liverpool. I could in those days rattle off the names of the major shipping companies, and the colours of their funnels, and tell where they’d come from and where they’d gone to.”

Prior to the reception, a Mass was held at the Cathedral to pray for seafarers, attended by AoS supporters, volunteers and head office staff.