Top Posts
The BDI drops down to 1,540; Wets maintain...
John Faraclas of All About Shipping contributes to...
Irene Rosberg addresses the 22nd Parliamentary Intelligence-Security Forum
Klaipeda looks to position itself as the Blue...
Pamella Roland Fall/Winter 2022: Bejeweled Eveningwear
Summer is on in Astypalea!
Hot Port News from GAC
Bibhu Mohapatra Fall/Winter 2022: On the Super Heroines...
Ready to hit the water? So are these...
Coach Fall/Winter 2022: A Collection That Feels Like...
Badgley Mischka Fall/Winter 2022: Wearable Sculpture in Ultra-Chic...
Power, philosophy and heroism of central bankers, and...
New superyacht goes up in flames
Home HRAwards National Marine Electronics Association Recognizes KVH Product Excellence with 2016 Awards 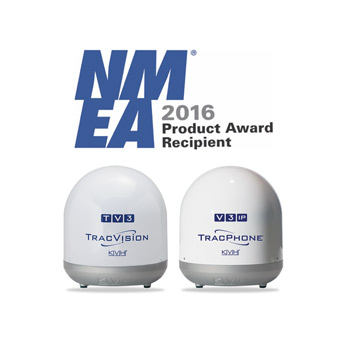 This is the 19th consecutive year that KVH has achieved the NMEA distinction for its TracVision satellite television antenna systems and the 14th time that KVH’s TracPhone satellite communications systems have been recognized. NMEA is an industry group made up of more than 600 companies, including manufacturers, dealers, and boat builders.

“NMEA’s skilled professionals work on boats and with boaters every day, so they have an unmatched understanding of what works, what doesn’t, and what keeps their customers satisfied,” says Martin Kits van Heyningen, KVH chief executive officer. “We are gratified to have earned this recognition from NMEA and its members based on their firsthand experience with our products and services, along with those of our competitors. We strive every day to justify the confidence that NMEA experts and their customers have placed in us.”

KVH’s TracPhone V3-IP and its earlier variant, the TracPhone V3, have been recognized with a NMEA product award in the satellite communications antenna category for the past five years in a row. The TracPhone V3-IP is a 37 cm (14.5 inch) diameter Ku-band VSAT antenna that operates on KVH’s worldwide mini-VSAT Broadbandsm network, the most widely fielded maritime VSAT service1. The ultra-compact system meets the increasing demand for broadband connectivity on boats today and into the future, delivering fast data speeds at low airtime costs, and with a terminal that can be installed on boats as small as 30 feet.

First introduced in 2014, the TracVision TV3 joins a long line of TracVision products that have been honored by NMEA, going back to 1998. The TracVision TV3 is an ultra-compact marine satellite TV system ideal for powerboats and sailboats that cruise as far as 100 nautical miles offshore. The TV3 makes it possible for boaters to enjoy their favorite high-definition television programming while on the water. The compact, 37 cm (14.5 inch) diameter system includes an IP-enabled TV-Hub for easy setup and operation, and makes it possible to access system information from a smartphone, tablet, or computer.

KVH Industries, Inc., is a leading provider of in-motion satellite TV and communications systems, having designed, manufactured, and sold more than 200,000 mobile satellite antennas for applications on vessels, vehicles, and aircraft. KVH is also a leading news, music, and entertainment content provider to many industries including maritime, retail, and leisure. Videotel, a KVH company, is a market-leading provider of training films, computer-based training and e-Learning. KVH is based in Middletown, RI, with research, development, and manufacturing operations in Middletown, RI, and Tinley Park, IL. The company’s global presence includes offices in Belgium, Brazil, Cyprus, Denmark, Hong Kong, Japan, the Netherlands, Norway, Singapore, and the United Kingdom.