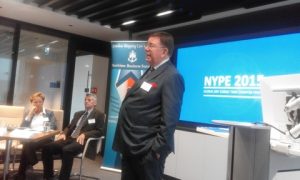 The future of time charter fixtures came under the spotlight at a London Shipping Law centre seminar on September 21st. Key revisions to the New York Produce Exchange Form (Time Charter) generally known as NYPE 2015, were discussed by experts who answered questions from some 90 maritime lawyers and other professionals.

Speakers were drawn from the BIMCO sub-committee who drafted NYPE 2015. They were Grant Hunter, Chief Officer, Legal and Contractual Affairs, BIMCO; Oslo-based lawyers Inga Froysa of Torvald Klaveness and Lasse Brautaset of Nordisk; and Paul Kaye, West of England P&I Club. As well as providing inputs to the modified and new clauses, these industry people had helped to compile the explanatory notes. 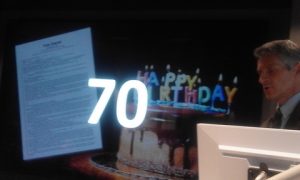 The seminar chairman was Struan Robertson, Head of Clarksons Platou Legal Services, who hosted the seminar at his firm’s London headquarters in St. Katharine Docks.

The new Time Charter had been produced jointly by BIMCO, the Association of Ship Brokers & Agents (USA) and the Singapore Maritime Foundation in October 2015. It was the first full revision since 1993, following three years of intensive discussions.

Grant Hunter explained the background. “During the development of the new edition, BIMCO consulted with the industry globally to gather a clear picture of commonly made amendments and rider clauses added by practitioners. Careful account was taken of the interests of owners and charterers to create a more balanced agreement than in previous versions of the charter. The new version requires detailed vessel descriptions to bring the form in line with current industry practices and recent legal changes.” 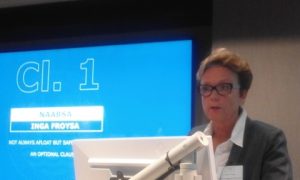 Inga Froysa from Torvald Klaveness in Olso delivering her speech

He traced the time form’s development back to 1946. The first form contained only 28 clauses. “It is difficult to overemphasise the nature and volume of changes to ships and the shipping industry since then.” These had been manifest in the riders added to the 1946 arrangements.

In 1993, half a century of such developments had been formally addressed with a 45-clause form. After another 20 years of unprecedented technological and legal changes to shipping, the new time charter form had been produced with 57 clauses to cover all envisaged circumstances.

Mr. Hunter had no doubt that NYPE 2015 was the best possible key document to reflect current commercial practices.

Inga Froya, who had chaired the BIMCO sub-committee, focused on delivery (clause 2), redelivery (4) and hold cleaning (10). 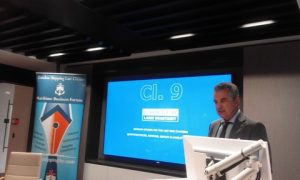 In NYPE ’46 and’93, owners were obliged to deliver the ship in a seaworthy condition, ready to receive cargo. Given the extent to which they were delivered at one place while the first cargo was loaded at another, the delivery provisions in NYPE ’46 and ’93 were often amended accordingly. The 2015 edition provides clearly for parties agreeing that the ship will be ready to receive cargo either at the port of delivery or at another port.

The new redelivery clause dovetails with the above. It obliges charterers to keep owners informed of the ship’s itinerary, within specific time periods. Owners need this information to secure the next employment for the vessel. On accepting redelivery, owners retain their rights to claim damages from the charterers for losses stemming from breaches of obligations under the charterparty. 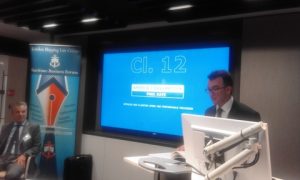 Under NYPE 2015, charterers may direct owners to require the crew to sweep or clean the holds between voyages. Cleaning agents and additives, generally supplied and paid for by the charterers, must conform to MARPOL Annex V. They must not be harmful to the environment and not contain carcinogenic, mutagenic or reprotoxic substances.

The new bunker clause covers quantities and prices; bunkering prior to delivery/redelivery; bunkering operations and sampling; quality and liability; fuel testing; ECA trading; and grades and quantities on redelivery. These factors had often been absent from or insufficiently provided for in many  time charter party forms. Many had not covered modern situations where ships carry and use different grades of fuel and are subject to sampling and testing. 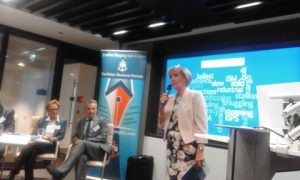 The new hire payment clause clarifies the situation re exact payment dates, the applicable grace period and the circumstances in which owners might seek to withdraw or suspend the charter party.

It states unequivocally that, irrespective of the reason, charterers failing to pay punctually will be in breach of the charter party. If they fail to pay hire within the three banking days’ grace period, the owners can withdraw the ship from charterers’ use. They can also claim damages from charterers for any losses—-which guards them against having to settle for lower market rates than they would have enjoyed had the charter continued. This clause takes into account recent legal developments.

As withdrawal from a time charter has far reaching contractual and commercial consequences, NYPE 2015 provides for an alternative to bring the charterer in line: suspension or partial suspension. However, this can only be implemented if already provided for in the charter party wording. Owners must also be careful that they do not breach the charter party terms.

Paul Kaye was especially concerned with speed and consumption (clause 12), slow steaming (38) and law and arbitration (54). 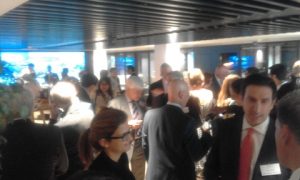 From the drinks and dips reception that followed… networking at its best!

A new clause deals with obligations and claims arising from speed and consumption. The charter form should specify the wind and sea states consistent with agreed speeds and consumption. Exceptional weather and navigation conditions and deviations to help a vessel in distress are acknowledged as grounds for changes in performance.

Linked with the above, a new slow steaming clause allows charterers to order a ship to proceed at reduced speed to arrive at its destination at a specified time. This enables masters to slow down for technical reasons. It will also help to counter claims from third parties arising from late delivery of cargo. An innovative aspect of this clause is the introduction of expert determination of claims, taking them outside arbitration.

NYPE 2015 provides a comprehensive choice of law and arbitration options, reflecting the global market in which the form will be used. The clause names London, New York and Singapore, although the contending parties can agree other jurisdictions. The clause defaults to US law and New York arbitration if the parties fail to indicate a choice.