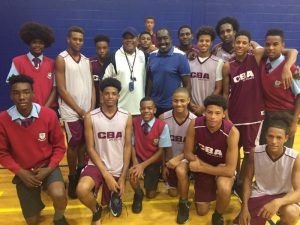 Hamilton, Bermuda, October 6, 2016—NBA legend Earl “The Pearl” Monroe paid a visit to CedarBridge Academy last week when he came to Bermuda as a special guest of the World Alternative Investment Summit (WAIS).

Monroe met with the CedarBridge high-school basketball team and its Head Coach RickeyWatts during a visit to the island for the inaugural asset-management event. BDA arranged the school visit, along with a schedule of other meetings, through its Business Concierge Service that offers assistance to prospective businesses or individuals seeking to invest or establish operations in the jurisdiction. Monroe or members of his team also met with Premier Michael Dunkley, Minister of Sport Sylvan Richards, Education Minister Wayne Scott, the Bermuda Tourism Authority (BTA), industry leaders, and the Oracle Team USA base.

“Mr. Monroe and his team are well connected with high-ranking sports and business professionals in the US,” noted BDA Business Development Manager Sean Moran. “They see Bermuda as a ‘hidden gem’ offering many opportunities for investment and youth athletic programmes, and we’re looking forward to exploring these kinds of opportunities further with them.”

After 13 years spent with the Baltimore Bullets and New York Knicks, Monroe retired an NBA All-Star and Hall of Famer in 1980, becoming almost as well-known off-court as an entrepreneur. In his post-NBA career, he has seen success as an author and television commentator, as well as in entertainment management, record and film projects, a confectionary company, and various venture capital enterprises for start-ups.

“We enjoyed talking with Mr. Monroe’s business team about Bermuda’s emerging sports-tourism sector and other tourism matters of mutual interest. It’s a good example of how the BDA and the BTA are working together to foster economic opportunities for the country,” noted Glenn Jones, BTA Director of Public & Stakeholder Relations.

Monroe took time out of business meetings to visit the CedarBridge senior basketball team, headed by Watts, who himself played high-school and college basketball before moving on to a pro-football career. Selected in the second round of the Chicago Bears 1979 draft, Watts, a Texas native and graduate of the University of Tulsa, was named to the Missouri Valley Conference All-Century Team and still holds the record for the longest catch in Soldier Field history while with the Bears (89 yards in which he scored).

“Our kids were overwhelmed with joy to meet Mr. Monroe as he’s the first pro basketball player they ever met,” explained Watts, whose 14-year tenure has seen the CedarBridge team win the Bermuda High-School Boys Championship nine times.

Watts said Monroe worked with the students on court before speaking to them about the game and what it takes to win. “They really enjoyed his talk afterwards and even my best player was elated that Mr. Monroe actually said he had a nice bank shot. This will be a memory that will last a lifetime for our kids—and myself,” he added. “I was a huge fan of Earl ‘The Pearl’ Monroe when I was in high-school, and I stole a lot of his moves and used them when I played. Thanks for letting us meet one of the best point guards ever to play the game.”