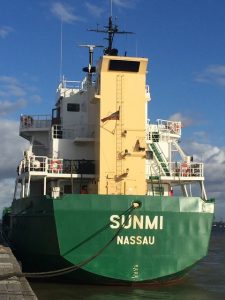 The “Sunmi” at Gravesend

Seafarers’ charity Apostleship of the Sea (AoS) has supported the crew of the Sunmi who were distressed after a fatal accident in Gravesend, Kent on 5th October.

A port pilot from the Port of London Authority died following an accident while boarding the general cargo ship in Gravesend Reach at about 6pm.

The Russian seafarers on board at the time were disturbed and deeply saddened by what had happened, and AoS Tilbury and Thames port chaplain Wojciech Holub visited them that night and the next morning to support them.

“They were disturbed and deeply saddened as a result of the accident,” said Wojciech.

He added, “There were no long conversations as they were busy, but our presence was much appreciated. We also provided them with means of communicating with their families.”

The crew received further support from AoS when the ship called at Pasajes port in Spain early this week.

AoS Pasajes port chaplain Jose Ignacio visited the crew together with a Russian seafarer living in Pasajes to offer assistance.

“The crew were very grateful for all the support they got, first in the UK and afterwards in Spain,” said Jose Ignacio.

Damen Workboat Festival a hit with clients and industry partners