“Dealing with certain uncertainty in shipping” – Prof. Helen Thanopoulou spells it out…. 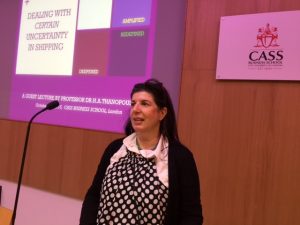 With the intriguing title “Dealing with certain uncertainty in shipping” our  Chiot resident (also distantly originating  from Chios  island)  Professor Helen  (Elena) Thanopoulou of the University of the Aegean, was in the City  last night to give an open lecture to an audience of CASS Business School students but also graduates and professionals. Another Chiot, John Faraclas was there with his camera:

Professor Costas Grammenos welcomed her warmly,  leaving her to warn the audience for the next two hours  that uncertain times require open mindsets and that in an economic and social environment threatened by many unknown-unknowns,  fixed thinking will not fix anything.

Referring to the example of Fukushima  – taking shipping  aback (a first in centuries almost) in 2011  – she went through a systematic classification of uncertainty sources in a shipping company’s life and the proliferation of what Taleb has termed “black swan” events pointing to the kind and  range of critical impacts of what – by definition – cannot be predicted. Focusing next on the  evolving map of energy transport in these last years  – on the basis of research published recently together with Professor Strandenes of the Norwegian NHH  –  she singled-out factors such as the shift in the production  paradigm, the new map of energy and the rise of renewables together with what she called the  impoverishment of the “de-franchised” average consumer for whom mainly shipping carries  finished goods and  the necessary raw materials for the production. 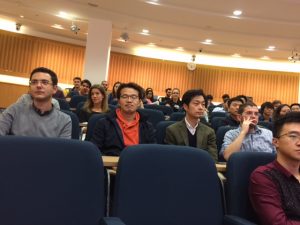 The centre sector of the auditorium

This final theme she had introduced also during a major Poseidonia event this June met with some but not full appreciation  at the time  of the technocratic – and not ideological angle – she was coming from. Some more bleak months – and a German banker warning about same –  later,  more voices have been rising against the excesses of global  austerity stifling shipping’s demand. Irrespective of personal beliefs we can all hope that what she concluded  her 2 hour lecture with – a  beneficial for shipping future world of more people sharing into a more productive organization of employment  and into more free time  generating new demand  –  will one day give the boost our morose markets need. 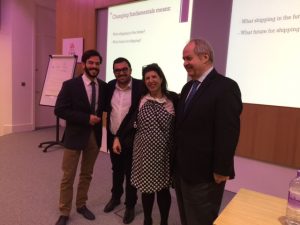 Accompanying her presentation with pictures from the Aegean she renewed her rendezvous to discuss more on “how much shipping in the future – how much future in shipping” at her base in Chios or in one of her other  favorite islands, such as the historical island of Hydra. It was a fitting reference  on the eve of  the National day of October 28 to the indomitable spirit of the many fights of Greeks to keep their country; and their soul.

The international students, friends and business audience put forward  six questions and one statement-point and Prof. Thanopoulou replied in her usual proper and convincing style!

Congratulations to Michael Matthaiakis and Constantinos Pallis,  the two students who worked so hard to organize this event and they really did with their teams! A lively networking drinks and dips reception followed. We look forward to such academic events promoting Planet Ocean’s most powerful business to all intents and purposes! 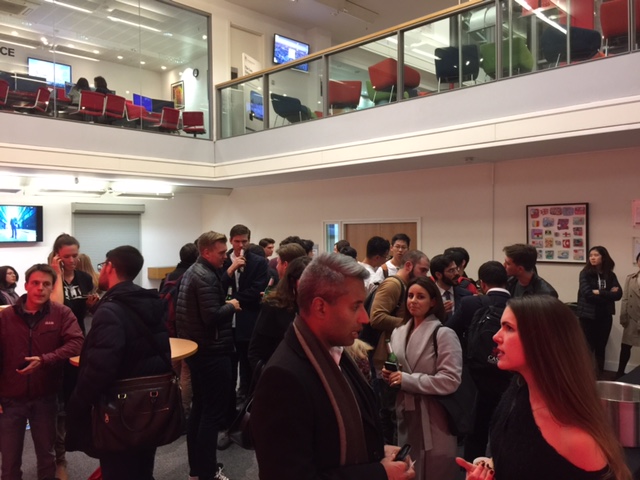 From the drinks and dips networking reception