Underworld traffic in stolen fine art and antiquities is growing at a frightening rate, an Italian insurance expert has warned.

Massimo Spadoni, business development manager of Siat Assicurazioni, delivered the message at the 2016 annual conference in Genoa of the International Union of Marine Insurance.

He said: “The black market in works of art is becoming as lucrative as the one in weapons and drugs.”  In particular, over the past decade there was an increasing trend of illicit trade from countries in the Middle East affected by armed conflict.

His conference presentation on the fine art market was said to be the first in the long history of IUMI, underlining the importance of specialist provision in today’s market by a select group of experienced insurers.

Siat is part of Unipol Group, which says it ranks first in non-life in Italy and fifth in Europe. It was established in 1967 devoted to marine insurance.  Within Siat, fine art comes within the cargo division, where clients include museum and fine art institutions and collectors.. Total written premium income in 2015 in cargo at Siat was €46m, and in marine hull €76m. 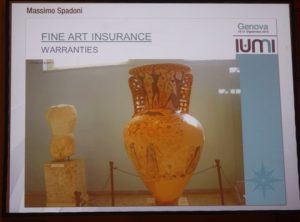 One of Mr Spadoni’s slides.

After warning of the use of stolen art to satisfy unscrupulous collectors and in money laundering, Mr Spadoni, a member of the IUMI cargo committee, highlighted the huge values involved in some of the most notorious robberies.

Among the crimes, Leonardo da Vinci’s Madonna dei Fusi (which translates as Madonna of the Yarnwinder) valued at Euro35m was stolen from a Scottish castle and later found in the office of a law firm in Glasgow.

In May 1998 two works by van Gogh, Le Jardinier and L’Arlésienne, and a Cézanne, Le Cabanon de Jourdan were seized by armed men from the Galleria Nazionale d’Arte Moderna in Rome. Those by the Dutch painter were the only oil paintings of his held in Italy. They were recovered seven weeks later.

Rembrandt ‘s Young Girl at a Window was among eight masterworks stolen from Dulwich Picture Gallery in London in 1966 but recovered within a few days after an investigation led by one of Britain’s top policemen, Detective Superintendent Charles Hewett.

Nine paintings including Impression, Sunrise by Claude Monet were grabbed by five masked raiders in broad daylight in 1985 from the Musée Marmottan Monet in Paris. The thieves ordered the gallery security chief and nearby visitors to lie while they carried out the deed. Total value of the heist, which included Renoir’s Bathers sitting on a Rock and Portrait of Monet and Berthe Morisot’s Young Lady at the Ball was more than $ 12.5m.  It was five years before the Impressionist paintings were recovered, in Corsica.

Another huge haul consisted of 19 pieces, including Lady Writing a Letter, with her Maid, by Jan Vermeer, and works by Goya and Velázquez, stolen from Russborough House, County Wicklow, by IRA dissidents in 1974 in an effort to secure the release of a comrade from prison. All the paintings were recovered in the Republic, but in 1986 Russborough House was again the subject of an assault, this time by Dublin underworld boss Martin Cahill and 12 accomplices who ran off with 16 paintings after crashing a jeep into the front door.

In 1971, thieves scaled a high wall and used a sledgehammer to smash through the metal bars of a window at Kenwood House, north London, and made off with The Guitar Player by Vermeer.

Vermeer has long been a popular target. In March 1990, two thieves stole a dozen works of art estimated to be worth $500m from Isabella Stewart Gardner Museum in Boston, Massachusetts, including the Dutch master’s work The Concert.  Among other precious items taken were one by Manet, three by Rembrandt, and five drawings by Degas.  Although the thieves were identified, their loot has never been recovered, said Mr Spadoni. This was despite a $5m reward offered for information. 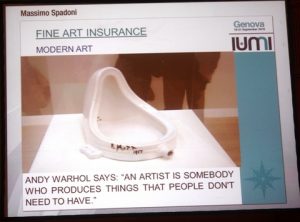 One of the most remarkable stories recounted by the Siat executive involved a Gaugin, Fruits on a Table. It was more than 40 years after being stolen from the Regent’s Park, London, apartment of a wealthy heiress that the painting came to light. Three men had bluffed their way into the flat, one of them posing as a policeman and the others as burglar-alarm technicians.

Painted in 1889 and estimated to be worth up to €30m, the Gaugin still life was recovered together with a work by another French artist, Pierre Bonnard, entitled Woman With Two Armchairs, thought to be worth €600,000. It emerged that the thieves smuggled the paintings by rail through France and into Italy but for unknown reasons left them on a train heading for Turin.

Railway workers found the pictures and gave them to a lost and found office where they remained for years before being put up for auction by the Italian state railway authority. A Fiat factory worker successfully bid Lire45,000 – equivalent to €23 in today’s money – who hung them on his kitchen wall in Turin and, when he retired, in his home town in Sicily. He realised there was something wrong after his son showed him works by Gauguin in book on art.

The Scream, the best known painting of Edvard Munch, has also had an extraordinary and anguished history. It was taken from the museum bearing the artist’s name in Oslo, in August 2004. Armed men walked into the building and ripped off the wall Munch’s famed picture together with another titled Madonna. The two paintings were missing for just over two years. The Scream, which was painted on cardboard, suffered water damage and flaking, while Madonna was torn.

Another version of The Scream had been stolen before the Winter Olympics of 1994 in Lillehammer but had been recovered.

A few days after the IUMI meeting, on September 30 2016, it was announced that two missing paintings by van Gogh had been recovered in good condition after 14 years. These were Seascape at Scheveningen (1882) and Congregation leaving the Reformed Church in Nuenen (1884-85), taken from Amsterdam’s Van Gogh Museum in 2002. It was a success for an investigation conducted by police on behalf of the Italian Public Prosecutions Department.

Mr Spadoni said that an FBI crime team had special training in the field of art crime. Over the years, Interpol, the FBI and other police agencies have compiled comprehensive lists of stolen works.

In 2005, the FBI began to compile what it calls it Top Ten Art Crimes. One of the oldest crimes on the international list is Caravaggio’s Nativity with San Lorenzo, a $20m work which was in 1969 prised from its frame above the altar at the Oratory of San Lorenzo in Palermo, Sicily.

Between 7,000 and 10,000 Iraqi artefacts from cultural institutions and archaeological sites remain missing after widespread looting in March and April 2003. One of the most impressive, a statue of King Entemena of Lagash, was recovered in 2006 and returned to the Iraqi government.

Valued at more than $3m, Cézanne’s View of Auvers-sur-Oise was lifted from the Ashmolean Museum, Oxford, in 1999. From the Museu Chácara Do Céu in Rio de Janeiro four armed men stole four works by Salvador Dalí, Henri Matisse, Pablo Picasso and Claude Monet in 2006 while the city was in the midst of Carnival celebrations.

Mr Spadoni said that in many markets, fine art risks are underwritten under the cargo category because they involve transit of property.  A subject moving from one location to another increased its value in the art market.  Risks are written under the term “from nail to nail.”

He asked his audience to consider how many times a piece of art moves in a normal shipment, and the fact that there were not many specialist carriers. “It is not easy to find a reliable one.” He recommended the involvement in risk assessment of a surveyor,, not a cargo surveyor but a property surveyor.  In a museum, the surveyor has to identify any concerns about the entrance, fire precautions, and windows. The gallery visitor “is the most important player, but also the most devastating.” Conditions had to be such that visitors cannot move, touch or handle works of art.

Robust implementation is key to success of 2020 0.5% Global Sulphur Cap