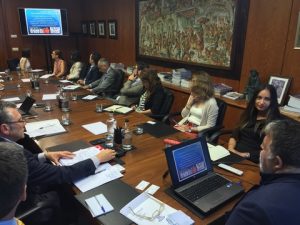 View from the meeting

Capt. Antonio M. Padrón y Santiago, “IMO Maritime Ambassador” and Maritime Authority of Tenerife held a meeting with representatives of the Shipowners´Association of Fishing Vessels of the Port of Vigo (ARVI)

During the meeting, Capt. Antonio M. Padrón explained the functions of his office, as a defender of seafarers, trying to encourage young people to consider a career at sea or in the maritime sector in order to inspire a new generation of maritime experts and seafarers.

In addition, the IMO Maritime Ambassador explained the progress made in the “Boarding Program for Maritime Students”.

The Shipowners´Association of Fishing Vessels of the Port of Vigo was formally constituted, on December 2, 1964.

Currently, ARVI has 262 companies, comprising a fleet of 384 vessels, of which 251 are freezers and 133 are freshers, with approximately 121,949 gross registered tons and about 6,600 crew members on board. Catches exceed 400,000 tonnes per year in fresh, frozen and salted fish.