Outcome of 74 Session of IACS Council 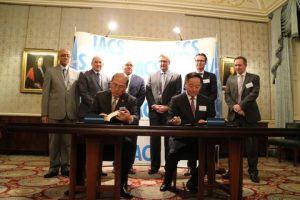 (London) – The International Association of Classification Societies (IACS) met last week for their 74th session.  Among the many issues on its agenda, the IACS Council focused heavily on continuing to oversee, promote and support work related to the International Maritime Organization, including delivering on its commitments to the IMO in relation to the Goal Based Standards (GBS) for oil tankers and bulk carriers.  Further to IMO’s confirmation last May that all IACS Members’ Class Rules are in compliance with GBS, IACS continues to work intensively on this issue both to meet the follow-up actions requested of it and as part of its ongoing work in assisting the IMO to use the experience gained from the initial verifications to expedite future maintenance audits. 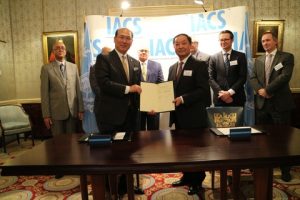 In the presence of other members of IACS, IMO’s SG and Dr. Sun show the signed MoA

The centrepiece of this year’s IACS Council meeting was the signing of a Memorandum of Agreement (MoA) with the IMO which was developed in order to facilitate even closer working on the two organisations shared goals and objectives with regard to safe, secure and environmentally sound shipping.  The MoA signals and will deliver a further strengthening of the bond between IACS Members, in their capacities as Recognized Organizations, and the IMO Member States they serve, for the benefit of the membership of both the IMO and IACS.  Work will initially concentrate on three areas: Cyber safety; the ongoing verification process of IACS Members’ Rules with goal-based standards; and the redesign of the Marine Casualty Investigation (MCI) module of the IMO Global Integrated Shipping Information System (GISIS); areas which demonstrate well the substantive contribution that IACS makes to the work of the IMO.

In this 25th anniversary year of IACS gold-standard Quality System Certification Scheme (QSCS), the Council also agreed  on five audit focus areas for the 2017 QSCS audit cycle.  The focus areas are developed in response to stakeholder inputs and the results of the previous year’s audits and are a key part of IACS commitment to continuous improvement.

At the end of the IACS Council meeting, the Chairman, Dr Sun of China Classification Society, commented ‘Council meeting 74 will be remembered for the signing of an MoA with the IMO.  This is a historic moment for IACS and reflects our ongoing commitment to the work of the IMO not only via participation and input to its many Committees, but by providing specific operational deliverables.’  Dr Sun continued ‘Many other issues were also accomplished in this session including further progress on GBS issues while also maintaining our focus on quality matters.  IACS as an organisation continues to deliver on its commitment to safer, cleaner shipping and to the efficient functioning of the maritime industry’.

The IACS Council also used the occasion of their gathering to meet with senior executives from a wide variety of other maritime organisations, using the opportunity to further develop agreements reached earlier in the year at the industry’s Tripartite event.  IACS Council informed the industry of their commitment to lead work-streams on cyber issues, monitoring, reporting and verification of ships’ fuel consumption and innovative survey techniques.

Adoption of the Ports Regulation by the European Parliament