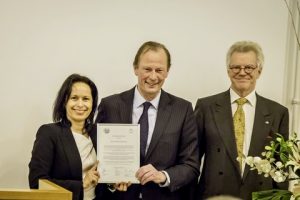 On December 21, René Berkvens, CEO of Damen Shipyards Group, received the KIVI Honorary Medal for Marine Technology. KIVI (est. 1847) is the professional association of engineers in the Netherlands. The ceremony took place at Delft Technical University during the symposium ‘Maritime Manufacturing – Is there room for innovation in the boardroom?’ Both jury and speakers praised Mr Berkvens’ long-standing role as an initiator and promoter of many commercial, organisational and strategic Damen successes as well as his contribution to the Dutch maritime industry.

In its considerations, the jury says: “René has realised that it is essential to maintain a close relationship between the company’s sales strategy and its R&D in all facets of the company,” and that “… the yard does  not simply offer a product, but a service that the customer uses for years to come.” They also stated that Mr Berkvens clearly identified the importance of finding ways to participate in the development of the client’s business model. 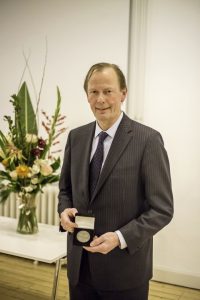 “The world behind the technology – customer, earning power, organisation, knowledge, strategy and innovation – that is his world. Along with technical and leadership qualities, he brings a stimulating human spirit. This is his work and this is what makes him, as a modern-day shipbuilder, excellent.

In addition to his professional performance, Mr Berkvens was praised as an individual: “Not only does he command a well-phrased vocabulary, he can also be very charming… a man you can trust and to whom you would gladly commission a contract. And that is what matters when selling capital goods.”

Since 2007, KIVI’s Maritime and Offshore sections award an Honorary Medal for Engineering to a person, company or organisation as “recognition for achieving exceptional results in and for the Dutch Maritime Industry.”

Damen Shipyards Group operates 32 shipbuilding and repair yards, employing 9,000 people worldwide. Damen has delivered more than 6,000 vessels in more than 100 countries and delivers some 180 vessels annually to customers worldwide. Based on its unique, standardised ship-design concept Damen is able to guarantee consistent quality.

In addition to ship design and shipbuilding, Damen Shiprepair & Conversion has a worldwide network of 16 repair and conversion yards with dry docks ranging up to 420 x 80 metres. Conversion projects range from adapting vessels to today’s requirements and regulations to the complete conversion of large offshore structures. DSC completes around 1,500 repair and maintenance jobs annually.