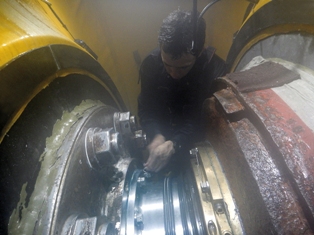 Hydrex Underwater Technology has assisted an excavation vessel hemorrhaging oil from a stern tube seal entangled with steel wire to pass safely through the Panama Canal.

The 156m long, Dutch-owned vessel was unable to make the canal transit until the propeller shaft seal had been repaired, potentially delaying operations and resulting in financial penalty for the owner.

Antwerp-headquartered underwater ship repair specialist Hydrex, however, repaired the leaky seal allowing the vessel to continue without disruption to its schedule.

“The ship needed to pass through the Panama Canal to reach its next destination, but the leak had to be repaired before it was allowed to do so. We immediately flew in a diving team to carry out a fast underwater repair so the vessel could continue,” said Dave Bleyenberg, Hydrex Production Executive.

“Our team arrived in Balboa, Panama, where the vessel lay at anchorage and sailed to the ship on a workboat loaded with all the equipment needed for the operation.” 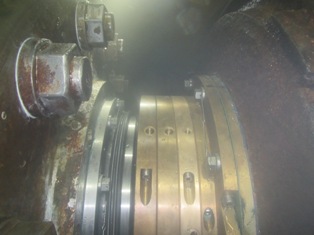 Following the dive team’s inspection of the seal, it was confirmed that steel cable was entwined around the seal, extensively damaging the stern tube assembly. The rope guard – a component designed to prevent ropes and wires from wrapping around the propeller – was found to be severely dented, destroying the seal’s split-type housing.

After removing the damaged components, which had already taken in water, the dive team set up a flexible Mobdock around the stern tube to create a dry environment in which to repair the equipment.

Since the liner had been severely scuffed from the steel wire, this was the first component to be replaced, after which diver technicians bonded four new stern tube seals and installed a new housing arrangement. All remaining parts of the stern tube seal assembly were then reinstalled and secured, including a new rope guard. After leak tests confirmed the stern tube seal’s integrity, the Mobdock was removed.

“The damage to this vessel’s propeller shaft seal was extensive but we were able to complete repairs in the same time frame as a regular stern tube seal replacement, despite the larger scope of work. Working together with our local support base, our teams worked in shifts to keep vessel down time to the absolute minimum,” said Bleyenberg.

The technology Hydrex has developed to expedite underwater propeller, rudder and thruster repairs formed the basis of a key note speech at a technical conference organised by the Rome branch of the Associazione Italiana di Tecnica Navale (ATENA).

Speaking in November on the merits of underwater technology in ship maintenance, Hydrex Sales Officer Steven De Keyzer, told Italy’s community of naval and merchant marine engineers: “Some people are surprised at the scope of maintenance work we can carry out underwater, without having to drydock the ship. Whether it is a simple maintenance procedure or a complex repair, we can provide fast, tailor-made and cost-effective solutions without disruption to operations.”

Commenting on the success of the conference, Massimo De Domenico, the President of the Rome division of ATENA, said: “The event was organised to create the opportunity to inform our audience of the technical possibilities of underwater work. The conference reached its goal, because it demonstrated that shipowners can avoid going to drydock, both for everyday maintenance operations and challenging repairs.”