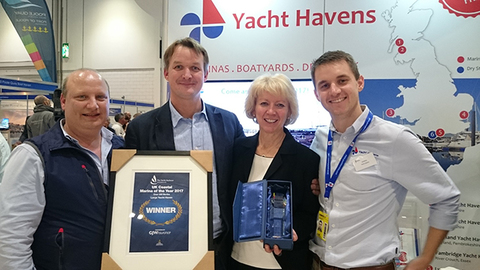 Yesterday (Thursday 12 January 2017) The Yacht Harbour Association (THYA), a group association within membership organisation British Marine, announced the winners of its prestigious Marina of the Year Awards, with proud sponsors GJW. Now in its fourth year, the Awards, sponsored by GJW, recognise the best of over 160 Gold Anchor accredited marinas from round the world. The winning marinas are voted for by their berth holders in the UK Coastal, UK Inland, International and Superyacht categories.

The Marina of the Year 2017 winners and runners up were:

International Marina of the Year 2017

Superyacht Marina of the year 2017

Carolyn Elder, Marina Manager at Largs Yacht Haven, commented upon receiving the award: “What a way to start 2017, we’re absolutely thrilled! I must praise our entire Haven Team for their hard work. It is our staff who really set our marina apart by setting extremely high standards and delivering an incredible service to our berth holders.”

“What makes this Award extra special is that it was voted for by boat owners in the UK. We have been overwhelmed by the comments and votes we received. We’re extremely grateful to our berth holders and visiting boat owners who voted for us.”

Craig Cochran, Marina and Facilities Operations Manager at Portavadie Marina, also commented: “We’ve been blessed with such a beautiful location and the foresight of the owners to build this wonderful development on Argyll’s Secret Coast, but it’s the staff and customers that really make the place come alive. We’d like to wish everyone a great boating season and look forward to welcoming old friends and new visitors in 2017!”

This year saw the launch of the accolade Marina of Distinction. This honour distinguishes a marina with over three consecutive years of continual customer service excellence, as voted for by its customers in the Marina of the Year competition. To qualify, marinas must rank a category finalist over three consecutive competitions. On the third year, they would automatically receive the title of Marina of Distinction.

The first marinas to receive this honour in 2017 are:

International Marina of the Year 2017

Superyacht Marina of the year 2017

Remarking on the accolade, Charles Bush, Managing Director at Mayflower Marina, said: “This is unexpected and fantastic news for Mayflower Marina. It is an honour to receive such a prestigious award; I am delighted for my staff and hugely grateful to our berth holders and visitors for their unstinting support over the years.”

Janet & Angus Maughan, Owners of Overwater Marina, also stated: “We, and the whole team at Overwater Marina are absolutely delighted to receive this Award. It’s made all the more special by virtue of the fact it is voted for by our customers.”

To commemorate their achievement, winners and runners up of the Awards, as well as receivers of Marina of Distinction, were presented with laser etched glass trophies and framed certificates by David Perfect, Managing Director of GJW, and Sarah Hanna, Chairman of The Yacht Harbour Association.

Jon White, General Manager of The Yacht Harbour Association, commented: “A huge congratulations to all the winners, runners up and all marinas who were voted for in the 2017 Marina of the Year competition. The array of marinas who stood out in this year’s competition showed how strong the today’s marina industry is at achieving, and in some cases exceeding, the modern consumer’s standard of quality service and excellent facilities.

Full steam ahead for Anglo-French agreement to moost marine tourism