Novorossiysk Shipping Company was officially established on 20 January 1967. Very soon thereafter Novoship developed to become one of the nation’s leaders in terms of fleet size and cargo volumes transported. The creation of this specialised tanker company enabled Russia to strengthen its position in global shipping, preserving and expanding the nation’s tanker fleet, whilst building a strong marine infrastructure in the Black sea basin. At the core of Novoship’s success lies a unique professional approach developed in Novorossiysk. The scope of Novoship’s operations and its significance made Novorossiysk the true “Tanker Capital” of Russia. 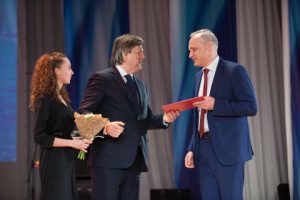 In 2007 Vladimir Putin, President of Russia, signed a decree to consolidate the state energy transportation assets, which saw Novoship become a part of newly established SCF Group. Nevertheless, Novoship remained a separate legal entity that continued to pay its taxes locally, to the Krasnodar regional budget. Today, Novoship is one of the key assets within SCF Group. SCF Management Services (Novorossiysk) established at its headquarters is responsible for the technical management of a major part of SCF Group’s conventional tanker fleet. It performs this role in full accordance with the strict requirements imposed by the world’s largest charterers, including the oil majors.

From the moment of its establishment, Novoship has played a key role in the life of the city and the region it which it is based. The growth of the company provided a powerful impetus for the development of Novorossiysk, with new residential estates, hotels, kindergartens, and health care facilities built. It has also seen Novorossiysk’s higher engineering maritime college established, now renamed Admiral Ushakov Maritime University. The company is still a trusted employer that provides work opportunities for more than two thousand Russian seamen.

Vladimir Putin, President of Russia, sent Novoship a greeting telegram. He emphasised that today Novoship “is justly considered as one of the flagships of the Russian and world tanker fleet” and pointed out that the Novoship team is comprised of top-ranked specialists who venerate the company’s history and many years of tradition, while steadily adopting cutting-edge technologies. “I’m sure that you will always be solving actual issues and help further enhance the status of Russian business with due professionalism”, – notes the telegram.

In his speech, the head of SCF Group Sergey Frank said:

“Novorossiysk Shipping Company was built on the foundation of age-old traditions of operating tankers in the Black Sea. Since 1885, when the Russian tanker Svet embarked on her voyage through the Black Sea, thousands of nautical miles have been covered and several generations of seafarers have changed, with each generation transferring knowledge, experience, love of the sea and seamanship onto the next. We are proud that the accumulated knowledge and experience continue to serve for the benefit of our domestic transport industry. The consolidation of the assets of Sovcomflot and Novoship has resulted in the emergence of Russia’s largest shipping company, a world leader in the transportation of energy by sea. The consolidation of the two companies was extremely timely, and enabled us to overcome one of the longest recessions in the modern history of the tanker business. By joining Sovcomflot Group, Novoship gave a powerful impulse for the development of the entire enterprise. The management of the Group should like to thank the entire team and our respected veterans for many years of work at sea and ashore, for the benefit of the Russian merchant fleet. Today the Group has serious strategic objectives. Undoubtedly, the experience in operating a conventional tanker fleet accumulated in Novorossiysk – Russia’s tanker capital – will help us to achieve these objectives with the maximum efficiency.” 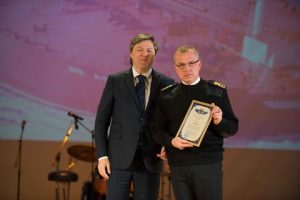 Victor Olersky, Deputy Minister of Transport of the Russian Federation, Head of the Federal Marine and River Transport Agency, said in his speech:

“The development strategy of Novorossiysk Shipping Company has always been based on the principals of high quality shipping and high social responsibility. From the very beginning the company’s management recognised that it was all about the staff and made efforts to ensure a strong workforce capacity. And in modern history this tradition is continuing. As part of Sovcomflot Group, a global leader in the seaborne transportation of energy resources, Novoship has entered a new phase of development. Recent years have not been easy for the entire freight market and its tanker segment is no exception. Nevertheless, Novoship and Sovcomflot Group have generally managed to maintain the positive momentum and implement a number of promising projects. All this was possible due to the dedicated teamwork of highly skilled marine and onshore professionals who comprise a unique team of like-minded colleagues”. 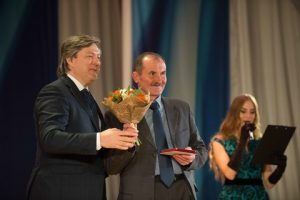 At the event, a large group of Novoship’s employees and veterans (about 90 persons) were awarded ministerial and corporate awards. Among them, Zhanna Spasova, Director of Novoship’s Economics Department, was awarded the title of Honorary worker of Transport of the Russian Federation. Alexey Khaydukov, Managing Director of SCF Management Services (Novorossiysk) was presented with a certificate of appreciation of the Ministry of Transport. Nikolay Tekuchev, pumpman of NS Concord tanker, and Evgeniy Vilyan, electrical engineer of Tower Bridge tanker, were awarded with the Rosmorrechflot Memorial Badge, and Eduard Apiyants, first mate of Kuban tanker, was presented with a letter of gratitude from Rosmorrechflot. Nikolay Demchenko, master of Elbrus tanker, was awarded a certificate of appreciation of Sovcomflot. Four captains and chief engineers – Alexey Balakhnin, Alexander Laptev, Nikolay Senokosenko, and Sergey Seleznev – were also awarded with special badges for “Trouble-free Operations in Maritime Transport”.

Novorossiysk also held a ceremony to mark the historic franking of a special postal envelope designed and issued by the Federal Publishing and Trading Centre Marka to commemorate the anniversary of Novoship. The envelope includes Novoship’s logo and a picture of the tanker NS Concord. From 16 January 2017 this envelope is available at all Russian post offices for anyone wishing to send a letter.

PAO Sovcomflot (SCF Group) is one of the world’s leading shipping companies, specialising in the transportation of crude oil, petroleum products, and liquefied gas, as well as servicing offshore upstream oil and gas installations and equipment. The Group’s fleet comprises 145 vessels with a total deadweight of over 13 million tonnes. The company is registered in St. Petersburg with offices in Moscow, Novorossiysk, Murmansk, Vladivostok, Yuzhno-Sakhalinsk, London, Limassol, and Dubai.

1885 was the year when the first sailing tanker Svet, with the deadweight of 1,700 tonnes and ordered by the Nobel Brothers Partnership in Sweden, was put into operation. It is considered the year of the commencement of oil shipments in the Black Sea by domestic ships. In 1890, Svet made three international voyages – two from Philadelphia to Rotterdam and one from New York to Italy. One more tanker named Luch, with a deadweight of 1,600 tonnes, was launched shortly thereafter. Those events marked the beginning of the Russian tanker fleet in the Black Sea.

During the First World War and the Civil War, the Black Sea merchant fleet suffered considerable losses. Its recovery began in 1922, and its size increased considerably over the span of the next five years. In 1932, the Central Executive Committee of the USSR made the decision to establish a new shipping company at the Black Sea – Sovtanker. During the Second World War its captains and crews demonstrated heroism by delivering cargoes to the theatre of war and taking part in the legendary Arctic Convoys. The present-day seamen of Novoship justly consider themselves to be successors to those courageous mariners.

Sovtanker became a part of the Black Sea Shipping Company, as a result of a post-war reorganisation. Following the expansion of the USSR’s foreign economic relations there was a need for further reorganisation of the shipping industry. The foundation was laid on 20 April 1964, when the Oil Tanker Fleet Administration of the Black Sea Shipping Company (BSSC) was relocated from Odessa to Novorossiysk. It was critical to set up the operation of the company, staff it, and consolidate shipping entities in the region as soon possible. Orest Sychenikov coped with this task brilliantly; his talent, diligence, and persistence allowed him to turn a young shipping company into the nationwide leader in terms of both the fleet, and the traffic volume within a short period of time.

20 January 1967 was the day when Victor Bakaev, Minister of the USSR Marine Fleet, issued a decree “On the separation of BSSC from the Oil Tanker Fleet Administration and the establishment of Novorossiysk Shipping Company”. This date is seen as the official day Novoship was established. By that time, Novorossiysk already had the specialised oil terminal at Sheskharis, newly constructed to connect the port with the oil fields in Western Siberia by a major oil pipeline. Shortly thereafter, the city became known as “The Tanker Capital” of the nation.

The shipping company was awarded the October Revolution Order in 1971 only some four years after its establishment. In the years ahead the company managed to maintain the established rate of development. The reputation of the Soviet tanker fleet in the international transportation service market was steadily improving. The special-purpose large-capacity fleet was developing at a fast pace. In particular, Novorossiysk Shipping Company was the first entity in the country to use supertankers such as the tanker Crimea, the pride of the domestic shipbuilding industry, with a deadweight of 150,000 tonnes. In the 1980s, Novorossiysk Shipping Company began the operation of dry cargo vessels. The Novorossiysk crews worked during the Caribbean Crisis, made voyages to war-struck Vietnam, honourably performed rescue operations at sea, and successfully defended themselves against pirate attacks. Throughout the shipping company’s history, its personnel has been awarded orders and medals over 370 times. It is remarkable that Novoship remains the only shipping company in the country’s history, where the entire crews of two vessels received high state awards.

This stage of Novoship’s history is associated with the names of the whole generation of high-class professional seamen, such as: Leonid Kryshtyn, the company’s Chief Engineer, who held this position for 30 years; Gennady Fedchenko, the head of the Navigation Safety Office and a Hero of Socialist Labour; and the famed Flag Captains Korney Tretyakov, Alexander Kosilov, and Petr Usachev.

In 1992, Novorossiysk Shipping Company was registered as Novoship Joint-Stock Company. Despite the challenging economic environment, the company managed not only to hold its positions in the international transportation market, but also strengthen its positions in a number of market segments. In particular, a large-scale fleet renewal programme was successfully implemented. 24 modern vessels with a total deadweight of 1.2 million tonnes were constructed in 1995-2000. Effectively this marked the rebirth of the company. To a large extent, this success is attributable to Leonid Loza, who was the Chief Officer of Novorossiysk Shipping Company in the 1980s and 1990s. His expertise and responsibility allowed the company to survive, expand its fleet, and ensure efficient operations in a competitive market.

In 2007, Novoship was merged with another leading shipping company Sovcomflot by resolution of the Russian President Vladimir Putin and became a part of a new group of companies.

Subsequently Novoship took an active part in the achievement of a major national objective – preparation for and the hosting of the 2014 Winter Olympics. The company carried out the large-scale construction and reconstruction of the sea and coastal infrastructure facilities at Sochi Port, within short time. As a result, the central part of Sochi changed and became the favourite leisure area of citizens and guests of the city. All the facilities constructed received high accolades from the leadership of the state, specialists, and the guests of the Olympic Games; and Sochi Port has become one of the most up-to-date passenger ports in the Black Sea.