Terrains of the Body…

Terrains of the Body: Photography from the National Museum of Women in the Arts

The key day globally is March 8, but some unplanned coincidences made January 18 and the succeeding days memorable in the fine arts calendar.

Whitechapel Art Gallery opened an exhibition named Terrains of the Body – a selection of photography and video from the collection of the National Museum of Women in the Arts, Washington DC. Featuring work by 17 contemporary artists from five continents, the show continues until April 16.

In another of its exhibition areas Whitechapel has a site-specific work, described as “an installation of astronomical data and our position in the universe” with charts receiving information from GPS satellites, and large bronze casts. This was commissioned from Polish-born Berlin artist Alicja Kwade.

A more extensive commission by Whitechapel continues on view until March 5. In this the radical Guerrilla Girls punchily expose what they see as the lack of diversity in European art organisations, with the title Is It Even Worse in Europe?

Over at the Tate group of galleries, the appointment of a new director, Maria Balshaw, who will move from the Whitworth in Manchester, was announced in succession to Sir Nicholas Serota. The Tate said that Ms Balshaw “has consistently championed women artists.”

All this coincided with the latest edition of London Art Fair where many international female artists were showcased by more than 129 participating galleries.

Whitechapel seizes on the opportunity to proclaim the creative progress of women photographers and video-makers in recent years who focus their lens on other women and on themselves. Kathryn Wat, chief curator of the Washington Museum, has worked with Whitechapel curator Emily Butler to present a valiantly purposeful show.

Why in 2017 is it as important as in the 1970s – the heyday of feminist art – to put on an exhibition about women? The curators remind us if it were necessary that women still face discrimination, harassment and sexism not only online but in the workplace and in other aspects of daily life. Some political leaders revel in adding to the insults.

A big difference between 40 years ago and now is that digital photography percolates into every aspect of communication. There are a trillion photographs freely circulating (that could serve equally as a statistic or as a figure of speech). 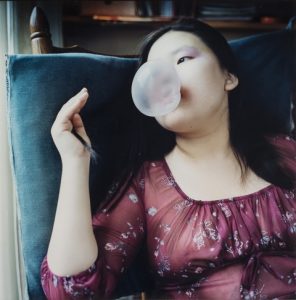 Most people experience photography on the small screen, but the new exhibition is valuable in encouraging viewers to look at it on a larger scale. Perspective of photography that can be overlooked are drawn to attention in a variety of formats. The depth of investigation carried out by the artists is a salient feature here. Ms Wat said that people might think that artist-photographers just go “snap, snap, snap” but the reality is that they bring to their endeavours the kind of fine adjustments that a painter would shade with their brushes.

Here, the practitioners are “taking ownership of the photographic space.”

“These artists embrace the female body as a vital medium for expressing identity, reflecting individual and collective experience, and forming narratives,” says the gallery.

Surrealism is an overused word, but it might serve as a handy way of summing up the genre of many of this ad hoc group of photographers.

For at least one of them, Stockholm-based Charlotte Gyllenhammar, who trained as a painter in Gothenburg, Stockholm and London, her practice is an example of the illustration escaping the frame to become variously installation and photography. 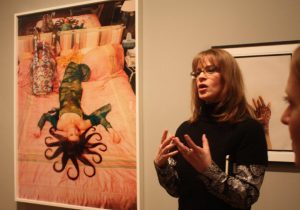 She shows an enigmatic image entitled Fall III, a Cibachrome print mounted on aluminium. Her work has been described as exploring “themes such as falling, the borders between outer and inner space, the limits of the private sphere, lack of freedom, memories and threatening images” (the words of Margareta Zetterström chief curator of Kulturhuset Stockholm, and Magnus Jensner chief curator of Dunkers Kulturhus in a booklet accompanying an exhibition in the Swedish capital).

For Fall III Charlotte started by seeing the female subject as a hanging tree, and saw her from below. We are standing underneath the ground and looking up. Her nature is exposed through the painful position in which she has been posed. “She is also protected, and in a way secretive,” said Charlotte. This reference to anxieties of the female is a theme of her studio work. She has been exploring since 1993 the concept of a woman suspended upside-down and in which, as per the Swedish catalogue mentioned above, “The skirt, billowing around her, suggests a flower or a vagina.”

The Dutch artist Hellen van Meene presents four of her poignant portraits of teenage girls. She conveys the impression of spontaneous sitters, but the compositions are the result of intense observation and of concentration on the light available.

Hellen confines herself to just a few shots from which to select each image. One of her most memorable images of a young woman was achieved after several unsatisfactory attempts at finding a meaningful pose. Everything clicked when she handed her subject a piece of bubble gum to blow. Hellen, who lives and works in West Friesland, has photos in the collection of many prominent museums, including Guggenheim New York and the Museum of Modern Art in that city..

Mexican-born Daniela Rossell, who lives and works in New York, has a striking Chromogenic print from her series Ricas y Famosas (Rich and Famous). This telenovela (soap-opera) phenomenon of indulgence is unsparingly shown: of Daniela’s series, Ms Wat said: “These are the women who love to be photographed.” Despite that, her pictures of the spoiled young of the privileged class cause unease in Mexico where there is such a contrast with the extensive poverty.

Kathryn Wat said: “We have seen today how important is the process of collaboration between the subject and the artist and with ourselves.”

The National Museum of Women in the Arts says it is the only major museum dedicated to the creative contributions of women. The museum champions women by collecting, exhibiting, researching and creating programmes “that advocate for equity and shine a light on excellence. NMWA highlights remarkable women artists of the past while also promoting the best women artists working today.” Its collection includes over 5,000 works by more than 1,000 women from the 16th century to the present.

Terrains of the Body. Photography from the National Museum of Women in the Arts. Until April 16 2017, Gallery 7, Whitechapel Gallery, 77-82 Whitechapel High Street, London E1. Free entrance.