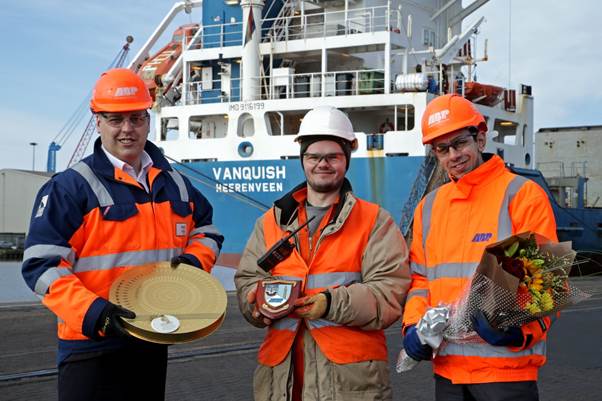 ABP’s Immingham Container Terminal (ICT) welcomed the MS Vanquish into the port of Immingham last week. The newly chartered vessel is working on behalf of A2B to meet the growing demand of the container business in the UK.

The Vanquish will increase A2B’s presence at Immingham’s Container Terminal from 9 to11 calls per week. This commitment to Immingham reflects the positive transformations and significant investment made at the terminal in the last 12 months to meet growing customer needs.

ABP own and operate Immingham and Hull container terminals on the Humber. With future investment plans due to be made at ICT, improvements and expansion plans mean that the capacity of containers through the terminal is expected to increase.

The facility operates on a 24/7 basis and boasts three ship to shore gantry cranes, four rubber tyred gantry cranes and is supported by seven brand new Kilmar reach stackers. This impressive line up on machinery enables short sea shipments to be discharged, loaded and sailing once again within a matter of hours.

Mark Frith, Port Manager for Grimsby and Immingham said: “The success of the Immingham Container Terminal is largely down to the staff that we have working there. We have recently recruited some exceptionally talented individuals to add to an already talented team whose key focus is on ensuring our customers are happy.”

The staff at ICT have been heavily focussing their attention on improvements around the site such as enabling advanced electronic data collection, improving IT infrastructure, setting KPI’s and continually improving their haulier booking-in system.

The vessel was welcomed into the port of Immingham where a traditional port plaque handover ceremony took place between the Port Manager and the Chief Officer of the vessel.

Our five year investment programme is worth £1 billion. Our investment is designed to respond to the needs of our customers whose business relies on our ports for access to international and, in some cases, domestic markets.

The four ports of Grimsby, Immingham, Hull and Goole handle more than 58 million tonnes of cargo between them each year worth approximately £75 billion.

The Port of Hull handles 10 million tonnes of cargo per annum and is the focal point for the development of the UK’s largest offshore wind turbine manufacturing, construction, assembly, and service facility, which is located on the Port’s Alexandra Dock. This new facility represents a £310 million investment and ahs created around 1000 direct jobs.