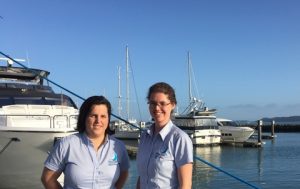 Kerrie Gray has taken over as Manager of the Poole Quay Boat Haven and Port of Poole Marina.  She first started working for PHC in the summer of 2005 as a seasonal staff member and returned to work at the marinas for a number of seasons between spending the winters in the Caribbean, volunteering as Watch Leader and Deckhand on the Tall Ships Youth Trust’s two 200ft brigs. Kerrie became a permanent member of staff in 2010 and has since moved up the ranks.

Kirsty Caño has been promoted from Marina Assistant to the role of Assistant Manager. Kirsty’s maritime career also began as a volunteer Watch Leader and Deckhand for the Tall Ships Youth Trust and she has completed around 75,000 nautical miles on various tall ships around the world. She then crewed on the Brownsea Island passenger ferries in Poole Harbour for four years before joining PHC in 2012.

Both Kerrie and Kirsty were born in Poole and spent much of their childhoods in and around the harbour.

Announcing these new appointments, Jim Stewart, Chief Executive of Poole Harbour Commissioners said:  “Kerrie and Kirsty have a huge amount of experience in running these successful marinas and will be well known to our berth holders and visitors.  They have played an important part in ensuring that the marinas operate to the highest standards over the past few years, and I am delighted to see them promoted to these key positions.”

Poole Quay Boat Haven and Port of Poole Marina are run by Poole Harbour Commissioners (PHC) and they both hold The Yacht Harbour Association’s coveted five Gold Anchor Award, which is a measure of marina quality and customer service.