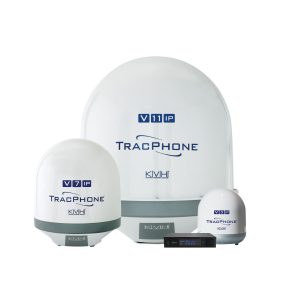 Designed and manufactured by KVH, the TracPhone® systems provide satellite broadband connectivity to yachts and commercial vessels around the world, and are a testament to the company’s innovation in mobile connectivity solutions

MIDDLETOWN, RI – March 30, 2017 – KVH Industries, Inc., (Nasdaq: KVHI), announced that it has shipped more than 7,000 mini-VSAT Broadbandsm systems, designed and manufactured by KVH to provide mobile connectivity at sea. The TracPhone V-series satellite communications antenna systems are currently in use on everything from small recreational sailboats cruising the coastline to 1,000-foot commercial freighters transiting the world’s oceans.
KVH launched the mini-VSAT Broadband service just 10 years ago, in July 2007, and has seen the popularity of the service grow, coinciding with an overall trend in the maritime industry toward increased reliance on broadband connectivity.

As recently as September 2016, a leading industry analyst, Northern Sky Research, reported that KVH’s mini-VSAT Broadband customers account for 29% of the vessels using Ku-band service, more than double the 14% share of the nearest competitor.

This dominant market share continues to be supported by significant customer wins from leading commercial maritime operators. The TracPhone V-series antenna systems are noteworthy for their technical innovation and performance, having won numerous awards, including the National Marine Electronics Association’s 2016 product of excellence award.

“Our mini-VSAT Broadband network is robust and fully global, and we are thrilled that thousands of our TracPhone V-series antenna systems are already in service around the world,” says Martin Kits van Heyningen, KVH’s CEO. “Our continuing dominance in the VSAT market is testimony to our heritage of innovation. It’s even more exciting to look ahead to how we can augment our existing network and enable KVH to support the dramatic surge in demand for data that the shipping industry is projected to experience over the next 10 years.”

KVH launched the mini-VSAT Broadband service with a commitment to provide fast, affordable satellite Internet and phone services via compact antennas at a time when slow data and expensive airtime costs were the norm. In 2012 – only five years after the network’s launch – industry reports found that mini-VSAT Broadband was the market share leader in maritime VSAT, a position KVH has retained consistently in subsequent industry reports.

KVH Industries is a leading provider of in-motion satellite TV and communications systems, having designed, manufactured, and sold more than 200,000 mobile satellite antennas for applications on vessels, vehicles, and aircraft. KVH is also a leading news, music, and entertainment content provider to many industries including maritime, retail, and leisure. VideotelTM, a KVH company, is a market-leading provider of training films, computer-based training and eLearning. KVH is based in Middletown, RI, with research, development, and manufacturing operations in Middletown, RI, and Tinley Park, IL. The company’s global presence includes offices in Belgium, Brazil, Cyprus, Denmark, Hong Kong, India, Japan, the Netherlands, Norway, the Philippines, Singapore, and the United Kingdom.

This press release contains forward-looking statements that involve risks and uncertainties. For example, forward-looking statements include statements regarding our financial goals for future periods, our anticipated revenue, and the impact of our future initiatives on revenue, competitive positioning, profitability, and product orders. Actual results could differ materially from the forward-looking statements made in this press release. Factors that might cause these differences include, but are not limited to: our ability to successfully implement our new initiatives; potential reduced sales to companies in or dependent upon the turbulent oil and gas industry; the impact of extended economic weakness on the sale and use of marine vessels and recreational vehicles; the potential inability to increase or maintain our market share in the market for airtime services; the need to increase sales of the TracPhone V-IP series products and related services to maintain and improve airtime gross margins; the need for, or delays in, qualification of products to customer or regulatory standards; potential declines or changes in customer demand, due to economic, seasonal, and other factors, particularly with respect to the TracPhone V-IP series, including with respect to new pricing models; recent increases in airtime termination rates and lower unit sales in our mobile business; increased price and service competition in the mobile connectivity market; and potential increased expenses associated with investments in new technology. These and other factors are discussed in more detail in KVH’s most recent Form 10-K filed with the SEC on March 9, 2017. Copies are available through its Investor Relations department and website, http://investors.kvh.com. KVH does not assume any obligation to update its forward-looking statements to reflect new information and developments.