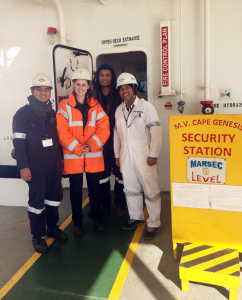 Seafarers’ charity Apostleship of the Sea (AoS) has appointed a new port chaplain.

Bryony Watson, 23, is the youngest AoS port chaplain, and joins the port chaplaincy team in Immingham. She spent four years as a volunteer ship visitor before taking on her current role.

Born and brought up in Grimsby, she first came to learn about the work of AoS after a talk by Fr Colum Kelly, who leads the Immingham port chaplaincy team.

“I was shocked that I knew so little about the lives of seafarers; especially as I’d lived by the sea all my life.

“Before Fr Colum’s talk ships were just lights on the horizon,” she said.

Bryony became involved with AoS soon after, assisting churches with the collection of shoeboxes, woolly hats and warm clothing for seafarers.

Her first ship visit was in December 2012. “I remember feeling over awed with the size of the ship and nervous about the gangway which looked quite precarious.

“However, I also remember the welcome we received, and how pleased the crew were to see us,” says Bryony, who graduated with a BA (Hons) in Fine Art in 2015 and briefly toyed with the idea of teaching in a primary school.

Bryony is an ice hockey player and enjoys reading, especially anything by John Steinbeck and Charles Dickens.

90% of world trade is transported by ship, and more than 100,000 ships visit British ports each year. However the life of a modern seafarer can be dangerous and lonely. They may spend up to a year at a time away from home, separated from their family and loved ones, often working in harsh conditions.

AoS chaplains and ship visitors welcome seafarers to our shores – regardless of their colour, race or creed and provide them with pastoral and practical assistance. They recognise them as brothers with an intrinsic human dignity which can be overlooked in the modern globalised maritime industry.