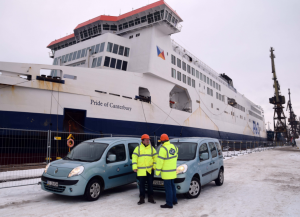 The pride of Canterbury

Szczecin, Poland, 2 May 2017 – Four P&O ferries are now back afloat after completing major refits at Remontowa Shipyard in Gdansk, with GAC Poland as their agent.

The 32,000-ton, 180 metre long Pride of York and 2000 passenger, 650 vehicle Pride of Canterbury were the first to arrive at the yard, in January and February respectively. They were followed by sister ships Pride of Bruges and Pride of Burgundy. Three months after the first ferry arrived, major renovations to all four had been completed and they were back plying their Hull-Zeebrugge and Dover-Calais routes.

Work began on preparing car decks and passenger areas as soon as the vessels set off on their two-day voyages to Gdansk. Once in the shipyard, GAC Poland ensured the smooth and efficient delivery of large volumes of the materials, spares and supplies required for the mammoth project which included upgrading the main engines and generators, blasting and painting the hulls, major changes to the ferries’ infrastructure, as well as modernisation of passenger areas, catering and retail outlets.  Cabins were fitted with new lighting, bedding and en-suite bathrooms and improved temperature controls. Superior cabins underwent total refurbishment with new furniture, carpets and curtains.

“Winning the ship agency business for the four P&O Ferries upgrades at Remontowa Yard was a major coup for us,” he adds. “We are no strangers to the yard and have worked closely on many occasions in the past, but this was the biggest project for some time. The project involved the delivery of large volumes of spares and supplies, and arrangements for the 714 personnel brought in for the refits, including transport and accommodation. Thanks to GAC’s hallmark attention to detail, reliability and local expertise, everything went without a hitch.”

John Garner, Fleet Director at P&O Ferries, says: “We looked at a number of shipyards across Europe for this vitally important work – which will guarantee the future of all four ships into the next decade – and settled on Remontowa for its track record of delivering first class re-fits and the economies of scale generated by taking the ships to the one yard.”

David Piaskowski, Commercial Area Director at Remontowa, notes: “The secret to success for any major project is good planning, and we were confident that by working with the GAC Poland team, everything would go according to plan.”