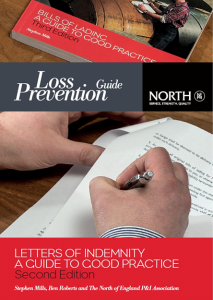 Cover of ‘Letters of Indemnity: A Guide to Good Practice’ Second Edition

North P&I Club has published a new edition of its popular guide book on letters of indemnity, which continue to be widely used in the shipping industry for a range of purposes. Written by leading maritime mediator Stephen Mills and North FD&D director Ben Roberts, the 2017 edition of ‘Letters of Indemnity: A Guide to Good Practice’ has been fully reviewed and updated to reflect recent case law and current industry practice.

The guide, which is designed to be used in conjunction with North’s guide ‘Bills of Lading: A Guide to Good Practice’, explains how to avoid disputes and problems arising from the use of letters of indemnity. Starting with a health warning, it provides commentary on the common types of letter of indemnity, the reasons they are used, the pitfalls and risks, and some of the legal and insurance issues which arise out of their use.

According to North’s head of loss prevention Tony Baker, ‘Letters of indemnity remain in widespread use in international trade and shipping in conjunction with, and sometimes in substitution for, bills of lading. Using letters of indemnity can be risky, potentially leaving shipowners exposed to high value claims and without P&I insurance cover. Our unique guide will help shipowners to understand and reduce the risks associated with using such letters.’

The second edition works on various levels, with practical guidance supplemented by detailed analysis and footnotes to show the latest legal foundation of the advice given.

Topical freight and trade issues to be discussed at joint meeting