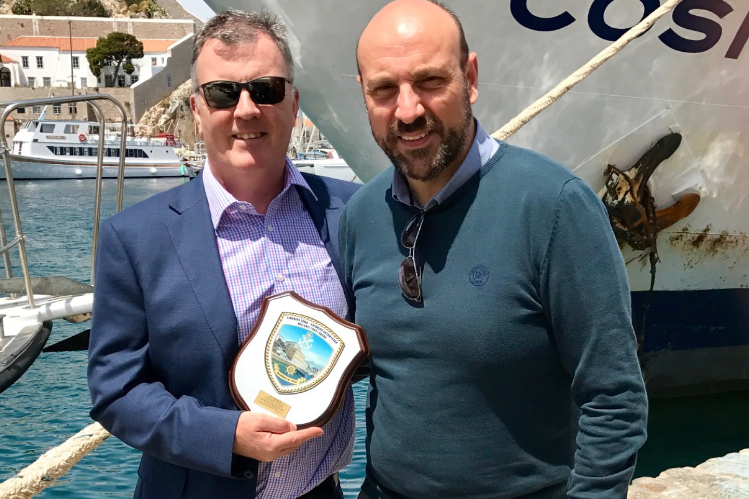 May 10, 2017 – North P&I Club has delivered a presentation to the Merchant Marine Academy in Hydra, Greece, emphasising the importance of safety procedures and the human element in avoiding maritime casualties.

The presentation was delivered by Tony Allen, Director (Greece), Gordon Robertson, Deputy Director (Greece), and Captain Dev Lajmi, Senior Claims Executive. The focus was on maritime casualties that became ‘Game Changers’ leading to significant changes in oil pollution and environmental legislation, and the introduction of the ISM Code for safer practices and procedures at sea. Some of the real-life lessons learned from major maritime casualties were examined, including the SS Torrey Canyon in 1967 and the Herald of Free Enterprise in 1987, addressing the importance of following the proper safety procedures and risk assessments, as well as the right attitude and approach from crew.

Commenting on the presentation, North’s director Tony Allen spoke of the importance of sharing this message with the Academy’s students: “Good seamanship is not just about following procedures, but also employing common sense and judgement. When it comes to maritime casualties, the right crew with the right attitude and safety culture has a vital role to play. Year after year, the Academy here in Hydra produces cadets of the highest quality who will go on to play leading roles in Greek shipping. It was a pleasure to discuss this vitally important issue with them.”

North P&I Club has a longstanding relationship with the Hydra Merchant Marine Academy, having delivered seminars there for the past 14 years. North has also sponsored the best student award for the past 10 years, which is presented annually in December.  Founded in 1749, the Academy is the oldest and most prestigious in Greece.

The 190m GT ‘A’ rated North P&I Club opened its office in Piraeus in 2000, where it now employs 13 staff. Greek owners and operators currently account for around 20% of North’s entered tonnage.

About North P&I Club
North P&I Club is a leading global marine insurer providing P&I, FD&D, war risks and ancillary insurance to 140 million GT of owned tonnage. Through its guaranteed subsidiary Sunderland Marine, North is also a leading insurer of fishing vessels, small craft and aquaculture risks. The Standard and Poor’s ‘A’ rated club is based in Newcastle upon Tyne, UK with regional offices in Greece, Hong Kong, Japan and Singapore and Sunderland Marine offices worldwide. North is a leading member of the International Group of P&I Clubs (IG), with 11.5% of the IG’s owned tonnage. The 13 IG clubs provide liability cover for approximately 90% of the world’s ocean-going tonnage and, as a member of the IG, North protects and promotes the interests of the international shipping industry. For further information visit: www.nepia.com.