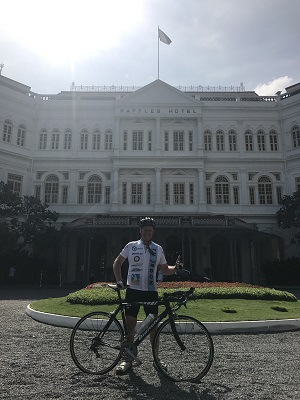 Sam wearing his Thordon-sponsored jersey outside the famous Raffles Hotel, Singapore, during training sessions for the LifeCycle ride

The AIDS/LifeCycle from San Francisco to Los Angles raised over US$16 million dollars last year, in what marks the world’s largest annual single event AIDS/HIV fundraiser.

Sam has been training hard for the cycle, which he expects will take six days to complete. “It’s not a race,” he says, “but it will still be a tough test of mental and physical stamina. Training is going well. I started in the UK in February, building up to 400km in four weeks. But the winter weather was terrible, so I’m looking forward to some Californian sunshine.”

To get acclimatised to the soaring Californian heat, Sam cycled for ten days around Asia, taking in Manilla, Ho Chi Minh City and Singapore, picking up donations along the way. Since making the decision to take part in the LifeCycle event, Sam has cycled over 3200km in preparation.

“I have always been a keen casual cyclist, but about three years ago after moving back to the UK, I got the bug, got serious, bought a lightweight carbon road bike, and started riding with my local club.

“In 2016, I took part in the Vaetternrundan event in Sweden: 300km in one day, raising over £1500 for Medecins Sans Frontieres. This gave me the confidence to look for a bigger challenge and while visiting some friends in Chicago last year, I found out about the AIDS/Lifecycle charity ride. Combining fundraising with a something you enjoy is very satisfying and worthwhile.

“Support has been overwhelming and I offer my thanks to all those that have sponsored me, particularly Thordon Bearings and its distributors for sponsoring my cycling jersey. Friends and colleagues have helped push the total sponsorship to over $4000.”

Now in its 15th year, the AIDS/LifeCycle raises important awareness about the ongoing HIV/AIDS epidemic, in addition to funding services such as HIV testing and screenings for other sexually transmitted infections.  Since the ride began as the California AIDS Ride in 1993, participants have raised more than $220 million and completed more than 55,000 journeys on bikes from San Francisco to Los Angeles.

To support Sam in his bid to raise $5000 for the San Francisco AIDS Foundation and LA LBGT Centre, visit:http://www.tofighthiv.org/site/TR/Events/AIDSLifeCycleCenter?px=3289705&pg=personal&fr_id=1990