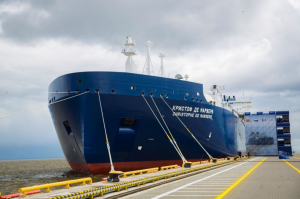 The tanker has been built to order for SCF Group to provide year-round transportation for LNG in the difficult ice conditions of the Kara Sea and Gulf of Ob (Yamal LNG project). Christophe de Margerie was commissioned by Sovcomflot on 27 March 2017 following her successful ice trials in the Arctic Ocean. 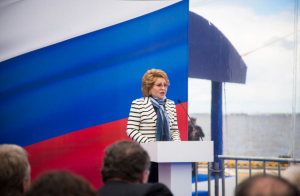 The new vessel was sponsored by Valentina Matviyenko, Chairman of the Federation Council of Russia

The LNG carrier was named after Christophe de Margerie, the former CEO of Total, who had played a key role in developing investment decisions and a technological basis for the Yamal LNG project. He had also made a major contribution to the development of Russo-French economic relations in general. The vessel’s godmother was Valentina Matvienko, Chairperson of the Russian Federation Council. Speaking at the ceremony, she said: “I name this vessel Christophe de Margerie and wish her, her crew and all Sovcomflot seafarers success and accident-free operations. Seven feet under the keel!”

Guests of honour at the ceremony included family members of Christophe de Margerie: his widow Bernadette de Margerie; his brother Jean-Marc de Margerie, and others.

The event was also attended by: Russian Minister of Transport Maxim Sokolov; Russian Minister of Economic DevelopmentMaxim Oreshkin; St. Petersburg’s Governor Georgy Poltavchenko; Chairman of the Management Board of  PAO NovatekLeonid Mikhelson; President of Total Patrick Pouyanne; President and Chairman of the Management Board of VTB BankAndrei Kostin; President and CEO of PAO Sovcomflot Sergey Frank, as well as representatives of the diplomatic missions of France, China and the Republic of Korea, the Yamal LNG company, CNPC, Silk Road Foundation, and others. 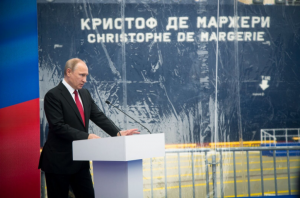 “I am extremely glad to welcome you at today’s solemn ceremony dedicated to the naming of Sovcomflot’s new Arctic LNG carrier. After successfully going through ice testing in March, the tanker has made her first call at the Russian port of Sabetta in the North. From now on, this modern vessel will bear the name of Christophe de Margerie, a French entrepreneur and a real, big friend of our country of Russia.

“He possessed a unique strategic vision and did so much to strengthen friendly, partnership relations with Russia, while being the driving force behind the implementation of a range of large joint energy projects. Naming the ship in his honour serves as another symbol of our sincere and kind disposition to this outstanding man, and as a commemoration of his memory.”

In his words of welcome, Jean-Marc de Margerie noted:

“This supertanker is honouring Christophe de Margerie, his special friendship with Russia and honouring his strong love of the sea. We, the family of Christophe de Margerie, see the naming of this tanker as a very special way that you have found to show us how much you care about Christophe as we too care about him. So we should like just to say thank you for that and wish a long life to this supership. God bless the ship, God bless her crew!”

In his speech, Patrick Pouyanne said:

“This ceremony is a deep emotion for us, because it reminds us all what Christophe did for Total and for our partnership with Russia. He forged a strong relationship, with passion and honesty. He believed in the success of the Yamal LNG project and this vessel is a symbol of the reality of this project. I’m sure that Christophe would have been very proud of what we have achieved today.”

Christophe de Margerie is the first vessel in a series of 15 gas carriers planned for the Yamal LNG project.

In terms of specifications, the vessel has no parallels in the world today. She was assigned an ice class Arc7, the highest ice class amongst existing merchant vessels. The gas carrier is capable of sailing independently through ice up to 2.1 metres thick.

The total power of the vessel’s main diesel engines is 64.35 MW. The power of her propulsion system is 45 MW, which is comparable to the capacity of a modern nuclear-powered icebreaker. The tanker is equipped with Azipod thrusters. Christophe de Margerie became the world’s first vessel with a high ice-class to have three Azipod units installed.

The powerful thrusters, in combination with other special equipment and mechanisms, ice-breaking bow and a special bridge design, provide a high ice-breaking capability and manoeuvrability, allowing the vessel to move continuously bow forward in ice up to 1.5 metres thick, and the use of the stern-first motion (Double Acting Tanker, DAT function) principle, which is required to overcome hummocks and heavy ice fields in high latitudes.

The turning circle of the vessel which is 299 metres long, in 1.7 metres thick ice, is 1,760 metres – which exceeds the design specification by almost twice.

The tanker was designed in accordance with the requirements of the Polar Code and is notable for her high energy efficiency and complies with high environmental standards. Along with traditional fuels, the vessel’s propulsion system can use LNG boil-off. Compared with conventional heavy fuel, the use of LNG can significantly reduce the emissions of harmful gases into the atmosphere: sulphur oxides (SOx) reduced by 90%; nitrogen oxides (NOx) reduced by 80% and carbon dioxide (CO2) emissions down by 15%. Such performances are particularly important for a vessel operating in the Arctic environment, which is highly sensitive to external factors.

The crew of the ship numbers 29, all of whom are Russian seafarers and 13 of which are officers. On top of the significant Arctic shipping experience each officer has, he or she has undergone extensive training at Sovcomflot’s own training centre in St. Petersburg.

The high ice-passing and exceptional manoeuvring qualities of the new tanker were fully confirmed by her ice trials, which took place from 19 February to 8 March 2017 in the Kara and Laptev Seas, and by her successful maiden call at the gas terminal at Sabetta Port on 28 March 2017.

The tanker’s successful maiden call at Sabetta Port, in terms of winter navigation, was the result of the diligent joint work of Sovcomflot, NOVATEK and Yamal LNG, which took about ten years. A project of such scale and complexity demanded an in-depth development of all the details, with the involvement of the leading scientific research and project organisations both from Russia (Arctic and Antarctic Research Institute, Krylov State Research Centre) and internationally (Aker Arctic Research Centre, Hamburg Ship Model Basin).

The marine transport component of the Yamal LNG project drew upon the successful operational experience of Sovcomflot’s vessels serving the existing large-scale oil and gas projects in the Barents and Pechora Seas (the Varandey and Prirazlomnoe projects, respectively), and the experimental transit voyages in the waters of the Northern Sea Route, which were carried out by Sovcomflot jointly with NOVATEK and other oil and gas companies from 2010 with the support of the RF Ministry of Transportation and Atomflot. These voyages demonstrated the technical possibility and economic viability of using high-latitude routes as a transport corridor for heavy-tonnage tankers. The success of this voyage opened a new deep-sea route, which passes north of the Novosibirsk Islands.

PAO Sovcomflot (SCF Group) is one of the world’s leading shipping companies, specialising in the transportation of crude oil, petroleum products, and liquefied gas, as well as servicing offshore upstream oil and gas installations and equipment. The Group’s fleet comprises 148 vessels with a total deadweight of over 13.1 million tonnes. The company is registered in St. Petersburg with offices in Moscow, Novorossiysk, Murmansk, Vladivostok, Yuzhno-Sakhalinsk, London, Limassol, and Dubai.

Christophe de Margerie (1951–2014) The former Chairman and CEO of Total. Mr. de Margerie was born in Paris on 6 August 1951. In 1974 he graduated from the École des Hautes Études Commerciales, after which he joined Total as Head of the Budget Planning Unit in the Finance Department. In 1987 he was promoted to Head of the Treasury Department and,three years later, he became Senior Vice-President for Finance of Total Trading and Middle East. In 1995 Mr. de Margerie was appointed President of Total for Middle Eastern Operations. In 1999 he became Executive Vice-President of TotalFinaElf Oil.

In January 2002 he took up the position of President of Total for Exploration and Production Operations.

Christophe de Margerie tragically died on the night of 20 October 2014. For his great contribution to the development of Russo-French economic and cultural ties, Mr. de Margerie was posthumously awarded the Order of Honour by Decree of the President of the Russian Federation No. 704 dated 1 November 2014.