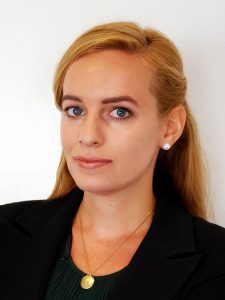 Eleni Antoniadou, Policy and Regulatory Affairs Advisor at the International Marine Contractors Association (IMCA) was one of 19 experts asked by KNect365 Maritime “What will power shipping in 2050?” The answers appear on Twitter, LinkedIn and Facebook. This followed a previous blog post last year on shipping companies’ potential to ‘go green’ to which Eleni also contributed.

“I was delighted to be asked to contribute to both KNect365 Maritime articles and make predictions on which alternative fuel would see the largest growth by 2050. A paper published last year from Dr Nishatabbas Rehmatulla of University College London Energy Institute provided an interesting basis on which I, and other industry experts, could develop answers,” says Eleni Antoniadou.

“Overall the consensus amongst the 19 responding to the question about what would power shipping in 2050 was that wind came in as the winner, and electric/battery technology was the second most mentioned energy source. I agreed that in the light of soaring fuel costs and an increased policy and regulatory focus on reducing emissions, we expect to see greater interest in renewable energy sources and lower carbon forms of energy conversion such as fuel cells.

“I also looked at the possibilities offered by wind-assisted propulsion, believing this will be widely adopted by 2050. Although we expect traditional and not so traditional hydro-carbon marine fuels, such as oil and natural gas, to predominate for the short to medium term, we expect genuinely low carbon alternatives to see the highest rate of growth by 2050, partly as a result of the almost insignificant existing base.”

Further information on IMCA and its work on behalf of the vast majority of global offshore marine contractors and the associated supply chain is available from www.imca-int.com and imca@imca-int.com. The association has LinkedIn and Facebook groups and its Twitter handle is @IMCAint