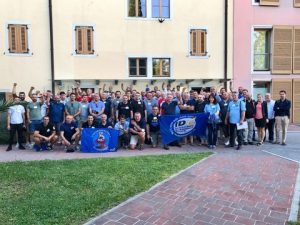 The International Dockworkers Council (IDC) has called a Europe-wide port stoppage in support of the conflict faced by Spanish dockers and in opposition to the ultra-liberal policies of the European Commission (EC).

IDC, 06/19/2017. Barcelona. There will be a two-hour strike taking place across
European ports on June 29, 2017, with all dockworker activities ceasing from 10:00 a.m. to 12:00 p.m. The decision to hold a Europe-wide stoppage was set out in the General Resolution adopted by the European Zone Assembly of the International Dockworkers Council (IDC) held in Koper, Slovenia on June 8 and 9, 2017.

This stoppage has been called for two main reasons: To support the struggle of Spanish dockworkers in their current conflict with that nation’s government; and to fight the ultra-liberal model of the European Union that goes against the interests of workers and trade unions.

On the first point, dockworkers in Spain are now forced to defend their jobs because of the deplorable situation created by the Spanish government, which has unilaterally imposed a legislative decree that, while achieving the consent of the European Commission, has never been agreed to by Spanish dockworkers.

According to IDC General Coordinator Jordi Aragunde, “the Spanish Minister of Public Works, Mr. Íñigo de la Serna, and his team have acted with great irresponsibility through its destabilization of the growing port sector. The legislative decree which has been approved is not only contrary to what has been agreed between companies and workers; it is also far removed from the demands of the European  Court of Justice, especially since Brussels has approved changes in the Belgian port model system which include many of the demands now being made by Spanish workers.”

According to Aragunde, “this irresponsibility is also reflected in the recent shuffling of the decks among major maritime corporations (Cosco Shipping has acquired 51 percent of Noatum; Bergé has sold its port towage subsidiary to a company from Dubai…). Spanish employers have refused to guarantee the jobs of over 6,000 workers in ports across the country, despite the fact that dockworkers have for the last four months put forward various realistic solutions to the conflict, and have even proposed a reduction in their wages.”

As to the second reason for the planned strike, the objective here is to support the IDC’s unanimous position of opposition to the neoliberal policies of companies and government administrations which aim to destroy the social gains of workers, increase precarious labour, and place a question mark on the security of their jobs.

It is with this in mind that the IDC has proposed to rejoin the Sectorial Social Dialogue Committee organized by the European Commission in order to lead the push for changes that are much needed by workers.

Among these changes are: Equal treatment for all dockworkers, that is, equal pay for equal work; the negotiation of collective agreements for all dockworkers; the creation of “humanized” terminals that favour job creation and development; ratification and compliance with International Labour Organization (ILO) Conventions 137 and 152 by all European Union member states; and the implementation of social policies that favour workers, free from the pressure exerted by large corporations and lobbies.

The businesses represented by the employer associations of the Federation of European Private Port Operators and Terminals (FEPORT) and the European Sea Ports Organisation (ESPO) on this Committee will have to justify and confirm their commitment to the development of professional and secure, non-precarious jobs in European ports. In this regard, IDC officials are scheduled to meet in June with representatives of FEPORT to address these and other issues.

The International Dockworkers Council is completely opposed to any attempt to heighten job insecurity in the ports; opposed to any form of privatization that opposes the interests of port workers (in respect to their rights and jobs); opposed to the excesses of European Union policies that undermine previously achieved social standards; opposed to the pressure exerted by the policy of the big maritime operators and ports that place the employment of workers into question; and opposed to any form of anti-union discrimination and all forms of racism, fascism, and xenophobia.

Furthermore, the IDC intends to devise a concrete strategy to support dockworkers in the port of Gothenburg, Sweden, who are waging a battle against attacks on their  job security from the large maritime corporations- attacks which have the acquiescence of the Swedish government and the European Commission.

Today it brings together around 115,000 dockworkers across five continents, and works to defend workers and their jobs through both training and the continual improvement of their working conditions.