39 nations ready to race at the Para World Sailing Championships 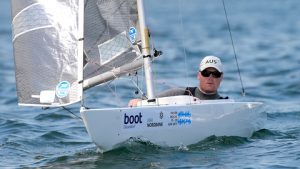 Matt Bugg of Australia in the 24 Norlin OD

The Para World Sailing Championships have opened in Kiel, Germany with more than 80 sailors from 39 nations registered to sail across three classes.

Racing will commence at 12:00 local time on Wednesday 21 June and conclude on Sunday 25 June. Ten races are scheduled for each fleet.

Addressing the sailors at the Opening Ceremony, World Sailing President Kim Andersen said, “This year’s Kieler Woche is an important one for World Sailing as the Para World Sailing Championships has been embedded in the programme of events. 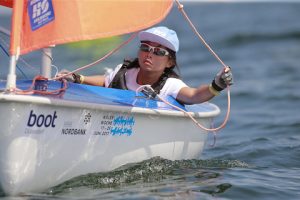 “The Para Worlds are crucial for World Sailing as we have to demonstrate to the International Paralympic Committee the positive, forward-thinking steps we have taken following sailing’s removal from the Tokyo 2020 Paralympic Games.

“It is pleasing to see we have a record 39 nations competing and many new sailors making their debut at this event.

“To the sailors, I thank you for your ongoing support. It speaks volumes about the sailing community that even when we’re faced with adversity we are brought closer together.”

Some of the stars of Paralympic sailing have flocked to Kiel and the 2.4 Norlin OD, which is an Open Gender One Person Keelboat for sailors with minimum disability, will see 45 sailors battle it out.

Germany’s Heiko Kroger warmed up for the world championships by taking gold at the Open 2.4 competition which took place on the same Kiel waters as the worlds. The fleet of 28 included Para World Sailing athletes as well as able-bodied competitors. Kroger found form on his home waters, finishing in the top four in ten of 11 races to seal gold.

Rio 2016 silver medallist Matt Bugg (AUS) showed that he will be a contender by snapping up three race wins in the warm up but he did not compete in the final two races of the series so missed out on the podium.

With the warm up races done and dusted, the worlds itself will be a bigger challenge for the competitors.

Two-time Paralympic gold medallist and three-time 2.4 Para World Sailing Champion, Damien Seguin (FRA) will be the favourite for gold. The Frenchman warmed up nicely for the worlds by taking gold in the 2.4 fleet at the World Cup Series event in Hyeres, France, earlier in the year and after his success at Rio 2016, he will be hard to beat.

Australia’s Bugg pushed Seguin hard at Rio 2016 and would feel aggrieved after spending some time in the protest room at the Paralympic Games. Bugg will be aiming to get one over on Seguin as he focuses on claiming his first world title.

Germany’s Kroger will be racing on his home waters and also knows what it takes to win having got a Sydney 2000 Paralympic gold under his belt.

Further contenders in the fleet include Jackie Gay (CAN), Rio 2016 silver medallist in the SKUD18 fleet and multiple world championship medallist Bjornar Erikstad (NOR). Other Paralympians will also be amongst the front runners.

Although China’s Xu is making his debut, it is not his first time racing within a competitive Para World Sailing fleet. When Beijing, China, hosted the 2008 Paralympic Games, they were entitled to a host nation place and Xu finished in the top ten.

From there he turned his attention to keelboats and is recognised as one of the most famous sailors in China with singlehanded records and most recently, completing the Mini Transat. Xu also trialled for Dongfeng Race Team for the 2014-15 Volvo Ocean Race but missed out on selection.

After his trials and tests out at sea, the Chinese racer has moved into the Hansa 303 and will have a challenge in the large fleet.

Alongside the debutants, there are several Paralympians within the fleet.

Germany’s Jens Kroker will be one of the favourites for gold. Kroker has three Paralympic medals to his name and will be racing on his home waters. Further competition will come from former Ocean racer and Rio 2016 Paralympic Piotr Cichocki as well as former Italian teammates and Paralympians Gian Bachisio Pira and Fabrizio Solazzo.

The Women’s Hansa 303, a One Person Keelboat open for sailors with minimum disability. will be spearheaded by Singapore’s Qian Yin Yap and Spain’s Violeta del Reine.  The duo sailed at the Rio 2016 Paralympic Sailing Competition, competing in the Mixed Two Person Keelboat. They have made the switch over to the Hansa 303 and with experience in the fiercest arena, they will be aiming for a podium finish.

Malaysia’s Nurul Amilin failed to qualify for Rio 2016 but has experience from the London 2012 Paralympics and will also be aiming for a medal.

Turkey’s Miray Ulas will make her Para World Sailing debut, representing Turkey for the first time at the championships.

Racing commences at 12:00 local time on Wednesday 21 June and will wrap up on Sunday 25 June.