The Baltic Exchange where the GSCC offices

Viewers can find herebelow the link for the Annual Report 2016-2017 of the G.S.C.C., which is prefaced by the Chairman, Mr. Haralambos J. Fafalios.

The Annual General Meeting will be held on Thursday, 22nd June 2017, at the Baltic Exchange.

Dear Colleagues,
It is with great pleasure that I present our 82nd annual report in 2017.
The year that has passed has seen momentous political change in America, Europe and the Middle East and whilst none of these changes directly affect the shipping industry there will be many trickle down effects, which we must analyse and prepare for any eventualities that
could have negative ramifications.

The G.S.C.C. through its many contacts on the international stage with a multitude of different organizations and bodies, endeavours to play an active role in consulting on any new legislation which affects the global shipping industry.

We are proud to represent an industry which by its nature provides the most environmentally clean way to move commodities around the world and facilitate world trade in a way that no other mode of transport can even come near to emulating. World shipping is nevertheless still striving to ever decrease its global footprint whilst at the same time transporting goods and services to communities around the world at very cost effective prices.

Whilst we in Europe are focusing on Brexit, President Trump, President Macron and a multitude of European elections this year, perhaps we should more closely analyse how a Qatar boycott and the instability it causes could affect the shipping industry. The continuing encroachment of China on regions around the South China Sea could have very serious
consequences for the shipping industry as we move forward. Panama’s rapprochement with China in lieu of Taiwan again signals the growing strength of China on the global stage as a Superpower.

Macro-economically, China still seems to lead the world in its economic growth rate with the Far East following in its wake. The U.S. economy still is moving robustly forward even though we have been promised various protectionist measures, which might affect overseas trade.

Europe is still lagging far behind, except perhaps for Germany and the UK whose economies continue to perform well despite BREXIT.

Against this background, the world shipping industry has to continually assess its future fleet needs and at present is at a point of mild overcapacity in most sectors. The availability of shipbuilding capacity is such that in a short space of time a large number of ships can be built to meet a need that might be short term and thus, lead to a long term glut.

The dry bulk and tanker sectors are at present in a fragile state and whilst fleet growth rates may seem low to many, they are calculated on a very large existing world fleet. The offshore sector is in a precarious state due to a much lower oil exploration budget by most producers.

Land based shale oil production is also becoming much more efficient thus, negating the need for some of the risky deep water exploration projects. Not surprisingly, the vigorous LPG and LNG orderbooks have led to serious overcapacity problems, which might take a few years to reach equilibrium. The ever larger container ships being built bring great efficiency per TEU than ever but at the same time make a sizeable part of the existing fleet quite obsolete.

Another trend, which could be considered worrying, is the unavailability of conventional ship finance. This is leading to the presence of many new forms of finance and to a multitude of new entrants whose attitude is different to those of traditional shipping companies. The longterm effects of this may be an ever more over-tonnaged world fleet as a result of somewhat misplaced investment decisions.

Whilst all this may seem to sound negative, there are always opportunities to be had from the unforeseen consequences of world events and the ability to benefit from them. It still makes it difficult to survive, and prosper and this is not helped by an ever increasing deluge of global legislation, which in many cases is not properly thought through and even more rarely discussed with the main stakeholders.

A. BALLAST WATER TREATMENT
After a 12 year gestation period this rather stillborn legislation is now in force with few approved systems in existence and a U.S. Coast Guard, which is still not comfortable with many of the systems offered.

B. M.R.V.’s
Whilst some pundits want this issue resolved in no time, its complexity is such that only a body like the I.M.O. has the maturity and experience to engage with all the interested parties and come up with a workable solution.

C. PIRACY
Though East Africa is no longer the epicentre of this problem, South East Asia and in particular West Africa have sufficiently regular outbreaks for us not be complacent and we must try to increase aerial surveillance where necessary in order to guarantee the safety of all seafarers and the world’s seaways.

D. HARMONIZED COMMON STRUCTURAL RULES
Not enough attention is given to this vital issue because unless robust minimum construction standards are adhered to, then the safe trading of ships in all commodities cannot be guaranteed.

The G.S.C.C. will always support the creation of legislation which ensures high quality long life ships.

E. CARGO LIQUEFACTION
Until we get to a point where not one life is lost due to this issue not enough is being done. The combination of port authorities turning a blind eye to T.M.L.s (Transportation Moisture Limits), and charterers coercing Owners to carry such cargoes, mean that there is still a great
risk of loss of life for pure commercial gain.

F. MIGRANT RESCUE
This is an ever growing humanitarian issue, which has still not been adequately dealt with on an official level. Governments must think about this issue carefully so that Merchant Shipping does not consider it a burden to carry out what otherwise would be a very human instinct. Ports of refuge should be available in all countries, which will be available to disembark refugees from merchant ships without challenging their charter obligations.

Within the context of Greece itself, shipping is still the country’s most robust industry and must be assisted in order to carry out its task that has led to Greece being the world’s largest tonnage provider to almost all shipping sectors.

With this in mind, we must stress how important well trained Greek seafarers are to achieve these goals and thus, we implore the government to increase the education capabilities in Greece both in quantity and quality.

Very crucially in this period, is the E.U. inquiry into the State Aid to Maritime Transport. It is imperative for Greece and for Europe itself, that no changes are made to the existing tried and tested legislation. The Greek Shipping Industry already pays substantial tonnage taxes, amongst the highest in Europe and thus, should not be burdened any further. It is also not a beneficiary of some of the largesse that some other countries offer their owners. We strongly urge the Greek Government to realize the significance of this sector and support it against an onslaught of foreign pressure.

We wholeheartedly support the position the U.G.S. has taken and feel that any attack on the Greek shipping Industry will only weaken Europe itself as a trading partner, and make its goods uncompetitive in a global market.

Apart from its close and enduring links with the UNION of GREEK SHIPOWNERS in Greece, and the united position we take on national and international issues, the G.S.C.C. prides itself on maintaining a close dialogue with all major international maritime organizations.

The I.M.O., INTERCARGO, INTERTANKO, I.C.S., BIMCO, E.U., National Governments and M.E.P.’s, are amongst the leading groups with whom we have close dialogues. We are proud to welcome Anastasios Papayiannopoulos as Chairman of BIMCO, heralding another
top position held by a Greek of great distinction.

Further to the above, we cherish our close contacts with the international Group of P and I clubs, having many Club Chairmen and directors on our Council.

Our relationship with the senior IACS members is also very close, not least due to our presence as individual members on the boards of many National and International Committees of leading Classification Societies. We also work together with them in fighting for ever higher vessel standards in construction and operation.

Being based in London, gives us the opportunity to keep in close contact with the Baltic Exchange (the world’s leading index provider), the U.K. Chamber of Shipping, Maritime London, and other London-based organizations. We also support the aims of LISW, London International Shipping Week, in reminding our global shipping community of the importance of the U.K. and London in particular.

Finally, I would like to thank our Member Offices for their support, the Council and the Secretariat for their hard work, which allows us to continue keeping our membership well informed and lobby on a global basis in favour of positive legislation and where this is negative, to make our opinion very well-known, backing it up with well-reasoned arguments.

I am particularly grateful to our Vice Chairmen, Constantine Caroussis, John M. Lyras, and Spyros Polemis, our Honorary Chairman Epaminondas Embiricos and our treasurer Diamantis Lemos.
My special thanks go to Stathes Kulukundis and his team John Hadjipateras, George Embiricos and Filippos Lemos without whom our monthly reports and other documents would not be as professionally prepared as they are. My thanks also go to Thimios Mitropoulos for his invaluable knowledge on international legislation and for keeping his eagle eye on our Council minutes.

Finally, our director Konstantinos Amarantidis, ably assisted by Maria Syllignaki continue to run the Committee smoothly and very professionally, and I thank them for their sterling efforts. 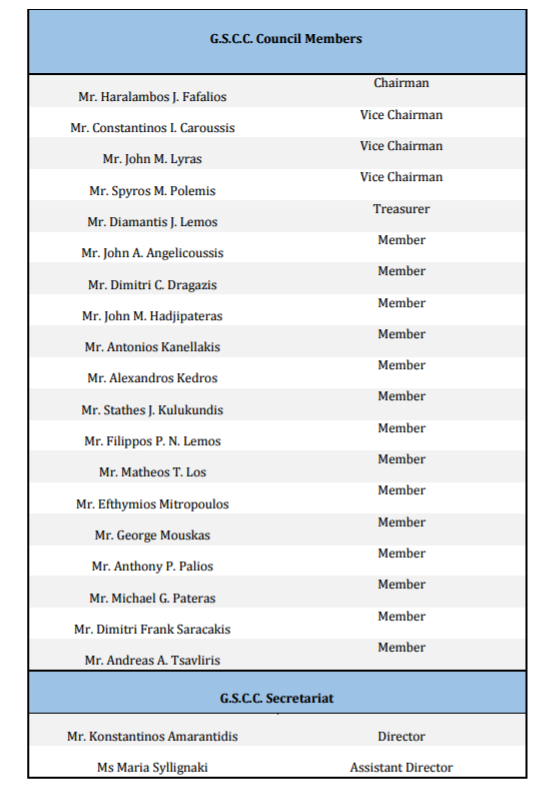 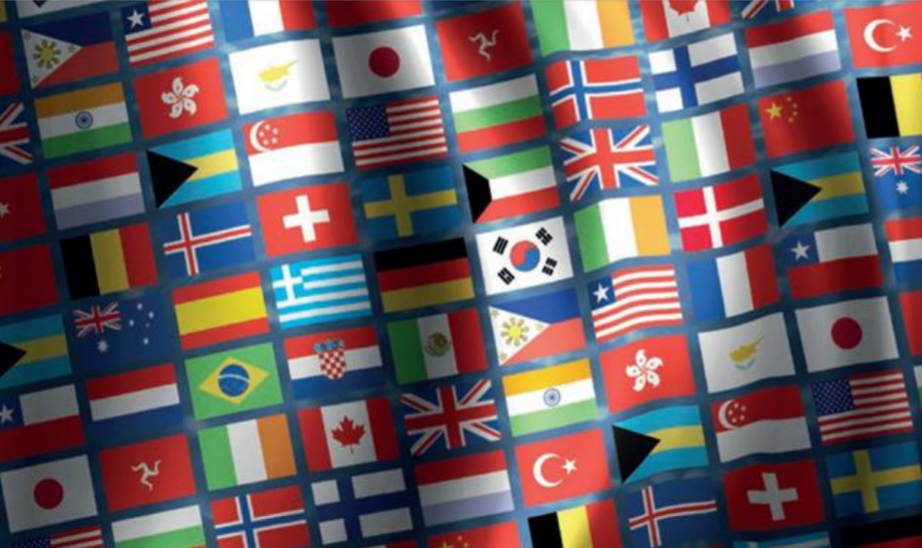 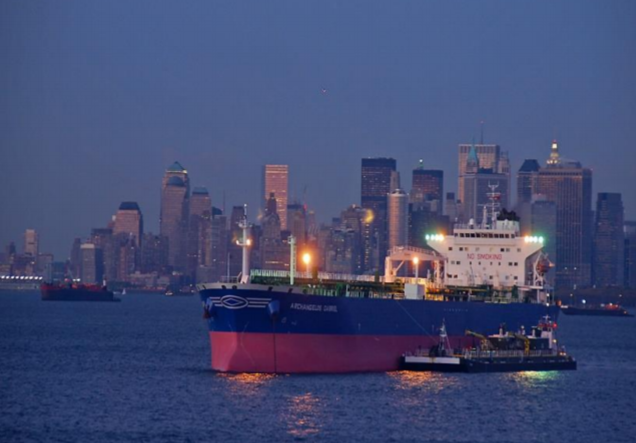 The total carrying capacity controlled by Greek parent companies has risen to above 328 million DWT over the period of a year. This, represents an increase of 8,166,193 DWT in the Greek-owned fleet, compared to 320 million DWT, at the same time last year

Despite the adverse market conditions, the slight increases and decreases are encouraging. On the one hand, a slight decrease was noted in liquefied gas carriers, chemical and product tankers, cargo ships and passenger ship types, in terms of number and DWT. On the other hand, oil tankers, ore and bulkcarriers, container ships and other cargo ships have slightly increased in relation to the corresponding world fleet type for the period 2015/2016. What is notable is that the Greek parent companies represent 25.2% of the world tanker fleet and the 16.2% of the Ore and Bulk fleet.

According to the data, the past year saw an increase in the average age of the world fleet, from 12.8 years in 2016, to 13.2 in the current year. However, the average Greek-controlled vessel, at 10.3 years of age, is still 2.9 years younger than the industry average. When calculated in terms of DWT and GT, the average age is reduced to just 8.6 and 8.7 years respectively. The fleet controlled by Greek interests is at a record high in terms of DWT and GT. Leading companies are diversifying successfully into more lucrative, but more technically challenging new areas such as shuttle tankers, containerships, gas carriers and offshore drilling.