“Survival” sailing at the Para Worlds 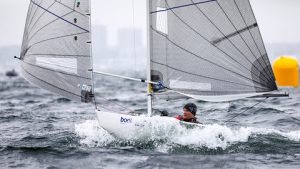 Whatever wind was lacking on Thursday at the 2017 Para World Sailing Championships certainly wasn’t on Friday, as the breeze turned up several notches, pushing sailors into “survival” mode.

In the opening race, it was Antonio Squizzato (ITA) who crossed the line first ahead of three-time Paralympian Bjørnar Erikstad (NOR) and Rio 2016 Paralympic silver medallist Matthew Bugg (AUS).

The second race was played out in even tougher conditions with a shifting wind increasing beyond 20 knots.

It was Australian, Bugg who took the victory with two-time Paralympic gold medallist Damien Seguin in second, followed by Squizzato in third, who moves up into the silver medal position as a result.

Afterwards, the smiling Italian said, “Today we had some very strong conditions and it was difficult to sail because the wind was up to 20 knots and it increased to 25/28.

“I had two lucky races. The wind shifted and I read it well. Here we have the best sailors in the world, so for me, it was a very good result.”

Recalling the second race a laughing Squizzato quips, “It was very difficult to survive! In that wind, I saw lots of the other boats were having problems on the downwind sections.”

When pressed on his chances moving into the final two days of competition he said, “Every day is different and so you never know. I hope to have more good races but you can never tell because this is a very competitive class.”

The conditions did, however, prove too much for the Men’s and Women’s Hansa 303, One Person Keelboats, who could only complete one of their three scheduled races.

Host nation favourite Kroker, summed up the day afterwards, “Today we had some interesting conditions. We had gusts up to, I would say, 22 knots and some choppy waves, so we were getting towards the limitations of this equipment but still, it was raceable conditions.”

Day of the Seafarer – join the campaign on 25 June