Para World Sailing Championships going down to the wire 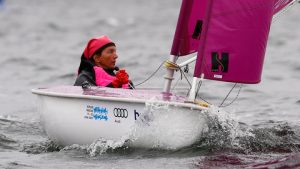 A scintillating finale at the Para World Sailing Championships is on the cards in Kiel, Germany after the penultimate day of competition was as close as close could be.

Three races across all three Para World Sailing disciplines were conducted and the leaderboards going into Sunday, the final day of competition, will see the race for the medals go down to the wire with plenty of possibilities.

In amongst Kieler Woche (Kiel Week) sailing festival, the sailors racing across the 2.4 Norlin OD, Men’s Hansa 303 and Women’s Hansa 303, all One Person Keelboats, were tested by a south westerly 13-16 knot breeze, somewhat less than the 20+ knots that pushed them to survival mode the day prior.

The trio fought tooth and nail at the front of the pack after three tight races.

Kroger will feel happiest after he posted two victories and a third to push himself up into first overall from third.

Australia’s Bugg won the final race of the day, pulling himself firmly into gold medal contention. After racing Bugg commented to the Para World Sailing Facebook Live, “It’s been a really good standard on the water. It was a good day with really good wind. I really enjoy heavy air sailing and I’m happy I’ve moved up.”

France’s Seguin dropped from first to third after a 2-6-5, somewhat below the standard that he has displayed so far this week.

Two races remain in the 2.4 Norlin OD and with the points so close, it’ll be a tense final day for the leading trio.

Bjornar Erikstad is six points off the podium but will have to hope he sails a perfect day and his rivals slip up for him to have a chance of reaching the podium.

Polish Rio 2016 Paralympian Piotr Cichocki, won all three races in the Men’s Hansa 303, coming from behind to defeat Australia’s Christopher Symonds on each occasion.

Sailing a two lap windward leeward course, Symonds was overhauled on the second upwind in the day’s opening race, the first downwind on the next and then in the final race of the day, having opened a 20 second advantage, Cichocki reduced the gap and passed him on the final downwind.

Cichocki was faster than Symonds and sailed a shorter distance across the three races which ultimately handed him the race victories.

Cichocki has now opened a two-point gap over the Australian. Three final day races remain and the pair will lock horns once again to decide who will be crowned Para World Sailing Champion.

In the Women’s Hansa 303, Spain’s Violeta del Reino is in firm control and has a eight point lead over Singapore’s Qian Yin Yap.

Del Reino’s sailed consistently, recording a 2-2-(5) whilst many of her competitors, albeit race winners, were unable to maintain a put together a good scoreline.

A strong final day will hand del Reino the title. Behind the leader, just three points split Yap in second, Ana Paula Goncalves (BRA) in third, Magali Moraines (FRA) in fourth and the fifth placed Pinpin with it still all to play for.

The final day of racing at the 2017 Para World Sailing Championships will commence at 11:00 local time.

The Men’s and Women’s Hansa 303 fleets will sail three final day races, having lost races the days’ prior. The 2.4 Norlin OD are now on schedule and two races will see the crowning of a 2017 Para World Sailing Champion.