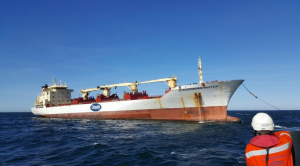 Viewers can find hereunder the Tsavliris’ Salvage Group latest activities with relevant photos for the Q2 2017:

On 25 March 2017, Tsavliris dispatched the AHT “DUTCH POWER” (3,200 BHP – 45 TBP) from Rotterdam to the assistance of the motor vessel “SCANDINAVIAN REEFER” (GT 7,944 – DWT 11,054), laden with refrigerated products. The vessel had anchored in North Sea, 45 miles from Flushing, following a mechanical breakdown.

On the same day, the “DUTCH POWER” arrived at the casualty’s position, towline was connected and towage commenced to Rotterdam/Damen shipyard.

On 26 March, the convoy arrived safely at the destination, the casualty was delivered to port tugs and berthed at “OPTICOOL BERTH ROTTERDAM”. The “DUTCH POWER” was released and moored at Lekhaven. 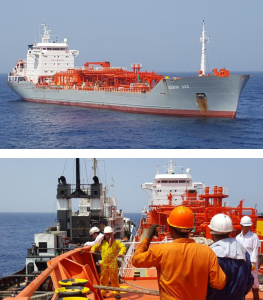 On 1 April 2017, the LPG Tanker “GEMINI GAS” (GT 7,082 – DWT 9,490) experienced fire in the engine room about 132 miles south-east of Salalah, Oman. During the incident the vessel was on passage from Khorfakkan, UAE to Port Sudan, laden with 4.400 tonnes of LPG mixed. The vessel sustained severe damages due to fire and sadly a seaman (electrician) lost his life.

On 2 April, Tsavliris dispatched the S/T “GLADIATOR” (BHP 8,000 – TBP 120) from Djibouti and on 6 April towage commenced. A salvage team was mobilised from Greece arriving in Salalah on 7 April. On 8 April the convoy arrived at Salalah anchorage and remained under tow at slow speed off Salalah port. On 10 April, the body of the deceased crewmember was transferred ashore to the hospital/morgue.

The cargo’s stable condition was maintained by retention of the required tank pressure/freezing level. On 11 April, the “GEMINI GAS” proceeded under tow to Salalah port and berthed with the assistance of port tugs. Electrical repairs were carried out by the salvage team by portable diesel generators and power was restored.

On 17 April, the salvage team and a team of four armed guards boarded the vessel for the onward voyage to Duqm. On 20 April, the convoy safely arrived at Duqm and the tug was released. The salvage team completed all necessary works in the engine room and the casualty was redelivered on 21 April. 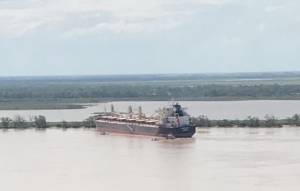 On 4 April, Tsavliris’ local salvage master boarded the vessel while the tugs “COOPER ESTIBADOR” (5,000 BHP – 65 TBP) and “RANQUEL” (4,500 BHP – 76 TBP) were mobilised from San Lorenzo and Rosario respectively. Both tugs arrived on the same day and connected to stern. Upon receipt of the Coast Guard’s permission, refloating attempts commenced under the directions of the salvage master.

The vessel refloated successfully and proceeded to anchorage area, escorted by the tugs. The casualty was safely anchored by both anchors and the two tugs were released. 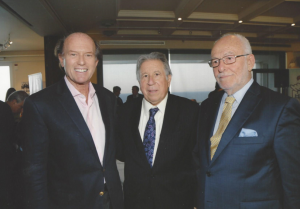 On 6 June 2017, hundreds of supporters and friends celebrated 35 years of operation of the Hellenic Marine Environment Protection Association (HELMEPA) at the Yacht Club of Greece. HELMEPA’s mission is the pioneering voluntary commitment of Greek seafarers and ship owners to safeguard the seas from ship-generated pollution, established in Piraeus in 1982.

Dr George A. Gratsos, HELMEPA’s Chairman, referred to the association’s voluntary contribution to the maritime training of Greek officers, arousing an environmental awareness of the wider public and students as well as the creation of similar ‘MEPA’ associations in seven more countries. 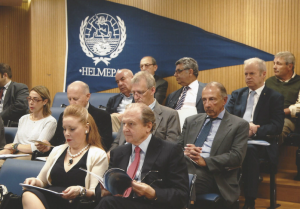 In the presence of INTERMEPA’s Chairman, AUSMEPA’s  (Australia) Warwick Norman, CYMEPA’s (Cyprus) Chairman George A. Tsavliris (and past Chairman of INTERMEPA),  NAMEPA’s (North America) Chairman Joseph Hughes and TURMEPA’s (Turkey) General Manager Aksit Ozkural, tributes were paid and plaques were presented to a number of personalities who played a part in promoting HELMEPA’s goals.

Tsavliris is a full member and an ardent supporter of HELMEPA.

Tsavliris Salvage Group took part in the annual Charity Rowing Competition held by Hill Dickinson LLP on 8 June 2017 at the picturesque Microlimano in Kastella, Piraeus and won the silver medal.

Tsavliris mixed team comprised of 4 men and 4 women. The rowing competition was in the form of timed races, with two boats competing against each other in each “heat”. Twelve teams competed in total and contributed to the charity “Doctors of the World”. Last year Tsavliris men’s team won the gold medal.