Winners announced for the Seatrade Awards 2017 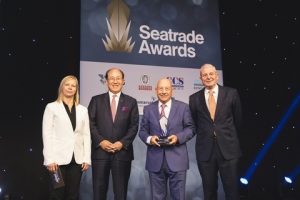 He was amongst esteemed figures and noteworthy individuals from across the shipping industry who gathered to honour the outstanding achievements and distinguished careers of winners at the 29th Seatrade Awards.

The ceremony took place at the historic Grosvenor House on Park Lane with a new format for the presentation ceremony which drew attendance from over 300 of the maritime industry’s leading personalities. The afternoon was hosted by Editor of Seatrade Maritime Review, Robert Jaques, in the presence of the guest of honour, Kitack Lim, IMO Secretary-General.

Chris Hayman, Chairman of Seatrade welcomed guests and made mention of the three new Intelligent Shipping Awards that have been introduced for 2017 whilst commenting that the three major Awards, for safety, clean shipping and investment in people, ‘of course remain in place, and I believe they always will’. 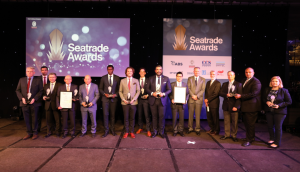 Mr Hayman also told the crowded room that ‘we are, as always, indebted to the Chairmen and Directors of the seven major international associations, and their assessors, for the work they do as judges and the unique industry experience they bring to the judging process.’

The awards, in time old tradition, remain a secret until the presentation ceremony and the winners are unveiled to great fanfare and celebration.

A full list of the deserving Seatrade Award winners can be found below:

Seatrade provides a range of global events, websites and publications that covers every aspect of the cruise and maritime industries, bringing together key people to encourage innovation and to produce powerful learning, networking and promotional platforms.

Operating in over 23 countries, UBM EMEA organizes many of the world’s largest, most important exhibitions, conferences, awards, directories, websites and publications in a wide variety of industries.