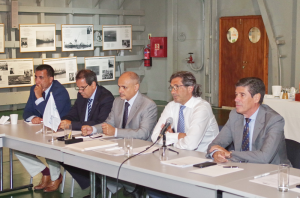 RINA’s Hellenic Technical Committee meeting organised by RINA Hellas on Wednesday 28 June 2017 on board the museum ship “SS Hellas Liberty”, gathered its members, who despite the heat wave of the days, were very keen to discuss the various hot topics in the agenda of marine industry.

Co-Chairmen of the Committee, Mr. Theo Baltatzis, General Manager of Technomar Shipping Inc. and Mr. Akis Tsirigakis, General Manager of Nautilus Marine Acquisition Corp., welcomed new members and presented their views of RINA today who continued to increase its existing fleet worldwide and in Greece, now counting over 5000 Ships for about 38 million GT. The RINA marine international network has been growing constantly and currently counts over 170 Offices worldwide. The newbuilding projects of dual fuel Cruise ships (7 ships+3 options of 183,000 GT, 6600 pax each) for Carnival Group (AIDA, Costa Crociere, P&O and CCL) is proceeding and the first ship is expected to be delivered by November 2018. 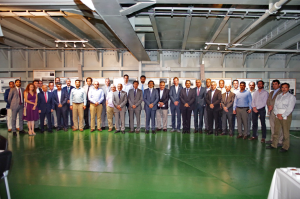 Stefano Bertilone, Commercial Director Marine, RINA EMEA, gave an overview of the RINA Group and its financial results of 2016, including the acquisition of Edif and the “birth” of RINA Consulting, as well as the actions of the Group in Marine, Energy, Infrastructures, Business Assurance and other of its business areas in the difficult environment of today.

Spyros Zolotas, RINA Area Manager for Greece and Cyprus, referred to the challenges that the Industry is facing worldwide and presented the actions that RINA is putting in place to help its customers. More experts, like surveyors, marine technical support coordinators and business development managers have been employed by RINA Hellas and are at the disposal of its clients so that they face today’s challenges more effectively. This investment on qualified personnel is followed by a significant growth of fleet in Greece and Cyprus which is expected to exceed 7 million GT by the end of the year.

The technical part of the meeting started with an overview of all new Rules and Regulations from IACS and IMO presented by Michael Markogiannis, Piraeus Plan Approval and Technical Support Manager. 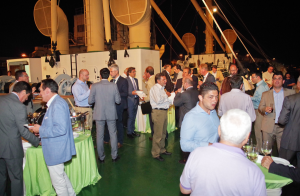 Franco Porcellacchia, Vice President of Carnival Corp. & PLC presented the project of Carnival Corporation related to the compliance of their Company to new environmental regulations through the installation of scrubbers on their fleet of Cruise vessels.

Another aspect of environmental compliance though the use of LNG has been offered in the presentation on “Trend in the LNG market” delivered by Pieter van den Ouden, Gas/LNG Safety Expert, Business Development Manager, RINA Rotterdam.

The latest concern on handling big data and related Cyber threats has been elaborated by Stefanos Chatzinikolaou, Piraeus R&D/Innovation Manager, RINA Academy Hellas Manager, in his presentation “From Big Data to CyberSecurity”.

The issues presented and discussed, provoked a lot of interest for exchange of views among the members that was continued in a lively atmosphere during the drinks and buffet on the deck of the historical ship until late._