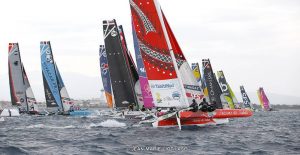 In a final sprint more reminiscent of the Tour’s cycling equivalent, a breakaway group of four each had a chance of coastal race victory today at the final buoy. Team Oman Sail had a win in their sights but in choosing to stick with Lorina Limonade Golfe du Morbihan inherently let the other two away. Limonade lead to the finish but Seguin’s team just had the pace to break through and win.

A delighted winning Iehl commented, “We are super happy! The goal was to get back on the podium. The Mediterranean is difficult. You have to make all the right choices every day. Every day. But right now we will enjoy this win, you have to be regular. If we can just be in the top three or four every day we will be well placed in the overall standings at the end. “

One top team who did not have the chance to figure in the final chase is Team SFS. For all that the Mediterranean crew were primed to perform on their return to the sea area they know best, Sofian Bouvet’s team which have twice won discipline doubles – Coastal and Stadium races in Dunkirk and in Les Sables d’Olonne, their mast fell down in modest breezes downwind under gennaker on the return leg from the Iles Medes close by Estartit. They score maximum points for their enforced retirement and drop to fifth overall.

SFS’ Team Manager Lionel Péan explained: “It was a lashing which came undone. The mast came down gently during a gybe. We recovered everything and the guys will check it and restep it. We expect to be on the start line tomorrow. It is disappointing because they were going well when it happened. We seem to have had a bit too many disappointments, too much adversity and problems for my liking.”

It was another difficult coastal race, affected by changes in wind strength and direction as the thundery, humid weather sucked the breeze out of the bay for periods. Often there was a wind inshore and some sea breeze further offshore but little in between. Tour leaders Trésors de Tahiti made the wrong choice off the line and struggled early on, fighting from last up to 11th – their worst score of the event so far – but they still head the leader-board by eight points from today’s winners Fondation FDJ-Des Pieds et Des Mains.

“We are pleased to have fought back from 29th to 11th and that is what keeps us at the top of the leaderboard tonight. It was a real battle. We made that one error on the first leg and paid a huge price. But it is a little reminder to us what can go wrong.” Said Trésor de Tahiti’s skipper Téva Plichart.

Stevie Morrison and Thierry Douillard’s Team Oman Sail consolidated their third overall today thanks to a good fourth place. With SFS dropping points because of their mast, Oman Sail have just a little breathing space behind them, 11pts now to SFS.

“It was a tough race. The wind was off the shore. The strategic models said go offshore early and the wind would bend round to the island. Tahiti went for that early and lost a lot. We were in the pack and Thierry did a fantastic job calling us to hold where we were. That was a nervous ten minutes as there were boats screaming along inshore of us. But we held out and got up to fifth or sixth.” Explained Stevie Morrison, “Into the finish we were up to second but the wind shut off. It was a straight line to the finish. We had Limonade holding a high angle and we had to keep our air clear. FDJ in fourth were just able to go round the outside.”

“Everyone seems to be our main opponents. That was the best we sailed a coastal race. It was unfortunate the opportunity fell to the guy behind but we are closer to the leaders after this race. We did a decent job today. But as for our target…who knows what our target is? The main target is to be sailing better at the end of the event than we did at the start and we are doing that. But it is all there to play for now. There are seven more results and we are right there in the hunt. We could either win still or be fifth or sixth.”

Racing at Act 6, Roses, continues Saturday with the Nautical Stadium.

The BDI needs at least an extra 1,300 points… to make sense