Mixing it up in Marseille 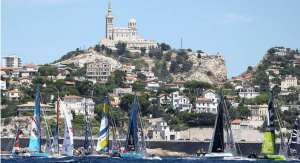 Another brilliantly entertaining Nautical Stadium race day once again upset the apple carts in the final stretch of the Tour de France à la Voile 2017. Today’s elimination stage and Super Final failed to dislodge the top dogs from their vantage points: Fondation FDJ – Des Mains et Des Pieds took a solid third to remain poised at the top of the overall leaderboard, 20 points ahead of Team SFS, who looked unusually under par today. While things may look deceptively calm at the top of the scoreboard, a heated battle is raging just below the surface.  Just two more days remain to seal fates in the event that started on 7th July, and while 30 points separate the top 6 teams, only four points now separate the third to sixth-placed boats (in order Trésors de Tahiti, Beijaflore, Team Oman Sail and Team Lorina Limonade – Golfe du Morbihan).

Today’s winners and losers will have to review their tactics on the road as the Tour Voile show ups sticks once again, this time headed for its ninth and final destination of Nice, where a Coastal Raid awaits tomorrow ahead of Saturday’s decisive Super Final, in which double points are up for grabs.

On the only race day held in Marseille – following yesterday’s cancellation due to a gusting Mistral wind – the 29 competing teams set out for the race course, set against the city’s picturesque Corniche coastal road,  in near-perfect conditions. A 13 – 16 knot westerly breeze, sunshine and blue skies accompanied the fleet as they fought tooth and nail throughout five qualifying races to gain a golden ticket to today’s Super Final. Team SFS were not among the privileged eight for the first time since the start of the event, and while they still retain second place overall, it would have been a decidedly better day had they managed to put some space between themselves and the podium-hungry pack nipping at their heels.

A well-deserved win from Beijaflore, their second over the 15 race days completed thus far, takes them to fourth place on equal points with third-placed Tresors de Tahiti. Tying up two wins in the qualifying races, the team of Valentin Bellet, Guillaume Pirouelle and Jason Saunders had clearly found their rhythm today and nailed an excellent start in the Super Final to burst off the line together with Vivacar.Fr. The pair were never more than a few lengths apart for the duration, but it was the Beijaflore boys who managed to squeeze across the line in first place.

Calling tactics on Beijaflore is Kiwi Jason Saunders, at just 26 years of age he already has two Olympic participations under his belt and currently has a good chance of making the top group for the Super Final in Nice.

“We didn’t have our best start and in the qualifiers we had an incident with TPM (Team Toulon Provence Mediteranée) and we unfortunately put a hole in their boat. So we then had to really focus to get into the Super Final. In the final we had a really tough race with Vivacar, we were really happy to have pipped them at the line.” commented Saunders.

Speculating on tactics for the final encounters he continued, “It’s really close on points and a lot of teams have been having some difficulties so we want to keep the ball rolling. We’ve been sailing well in the last few stages and we want to keep the same routine and make sure that we really attack the raid tomorrow.”

Saunders echoed the sentiments expressed by sailors and pundits alike throughout this demanding and unpredictable tour de force as he noted the exceptionally high level in this edition: “This competition is unlike anything I’ve done before, that’s for sure. Just to stay concentrated for a month is really difficult so it’s been an awesome experience for me and I’ve learnt a lot along the way. The level is extremely high, I always thought Olympic sailing was the highest but this is definitely up there at that level at times. It’s an amazing event and I’d like to do more of it.”

Proving that nothing can be taken for granted in this competition, three out of the top four teams in this morning’s overall classification failed to qualify for today’s Super Final. In addition to Team SFS, Tresors de Tahiti and Oman Sail also missed out – the latter consequently slipping from fourth to fifth in the general rankings. Conversely Team Installux Aluminium and Team Occitanie Sud de France made their first Super Final since Act 1 in Dunkirk. Unfortunately, together with Coved – Paprec, all three crossed the finish line early, putting an end to any hopes for top scores today.