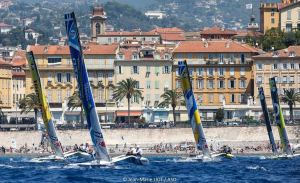 Twenty-nine teams, nine Acts, eight Coastal Raids and more Nautical Stadium Races than you can shake a stick at are just a few of the numbers that cannot possibly sum up a marathon sailing event that is as exciting as it is exacting.

Leadership changes, black flag disqualifications, the full spectrum of wind and sea conditions, equipment damage and – in one case – failure to comply with the measurement rules, all played their part in this rollercoaster edition which saw seven different crews chalk up wins over the course of 17 race days. The new format adopted in 2015 – alternating Coastal Raids of up to 40 miles with short, fast Stadium Racing heats leading to a grand final on each leg – is a challenge to crews’ skills and endurance whilst providing spectator friendly racing.

As may be expected with such a long and demanding event, in which fatigue and stress are factors not to be underestimated, consistency was key. Fondation FDJ – Des Pieds et Des Mains, skippered by double Paralympic champion Damien Seguin and three-time Tour winner Damien Iehl together with crew members Benjamin Amiot and Mathieu Bourdais, calmly collected one solid result after another to lock up their overall win a day early.

“It was a difficult Tour, not stressful but tiring. We were consistent on the water and we didn’t have any equipment problems.” said Seguin, who went on to underline the importance of preparation. “There was a very high standard in this edition. We saw from the start of the season that this would be a close one because the standard was so high and we trained hard from February. There was a massive battle between the top 10 boats.”

The incredibly high level of competition was a recurring theme throughout this anniversary edition. The unique format of the Tour has seen sustained growth since the adoption of the Diam 24 in 2015 and attracts sailors from all spheres of the sport – from multihull to ocean racers. The return of a large number of Olympic talents after last year’s games undoubtedly raised the bar, however a series of pre-season events as well as some serious training programmes also contributed.

While Fondation FDJ had their win wrapped up with a day in hand, the runner-up places were only assigned at the conclusion of a thrilling Super Final in Act 9 in Nice. Tresors de Tahiti, skipperd by Teva Plichart, and Beijaflore Sailing, skippered by Valentin Bellet, emerged as the cream of a tightly-packed crop, claiming second and third place respectively in the general classification.

Piers Hugh Smith, skipper of Team Maverick SSR, whose youngest crew member celebrated their 19th birthday during the Tour, saw this inaugural participation as a learning experience for future campaigns. Considering the fact that they were for some time the only crew sailing a Diam 24 in the UK, simply completing this tour de force in the company of such experienced teams can be considered a success.

“It was harder than we expected.” confessed Hugh Smith. “We were blown away. It’s been an incredible event. We’ve learnt a huge amount and the whole roadshow aspect of the tour is like nothing else. It’s a really exceptional event. We have a five-year plan to compete in the next editions of the Tour and get up to a really competitive level.”

Asked what advice he would give to other new teams joining the Tour for the first time he had clear ideas: “Get to France and sail as much as you can here on the Diam 24s. Don’t be afraid to do this event on a small budget. It’s very accessible and the organisation put a huge effort in to make it accessible, we’re really pleased with all the help they’ve given us. Just come and do it, but be prepared: the event is so long, if there are any weaknesses in the boat, the crew or the planning they will definitely come out. But it’s an endurance event, the better you prepare, the better it’s going to be.”

Flying the Spanish flag and based in Barcelona but with an international crew boasting J/80 World Champion duo Hugo Rocha and Alexey Semenov on board, new entry New Territories managed several top ten places and posted a respectable 16th place finish overall, just shy of the middle of the fleet, in their debut Tour Voile outing.

Swiss round-the-world sailor Bernard Stamm, with a series of Vendée Globe, Mini Transat, and Velux 5 Oceans participations under his belt to name but a few, skippered the Diam 24 Cheminées Poujoulat to within inches of a top-eight finish. Sadly a collision in the final Coastal Raid in Nice put the team out of the Super Final and out of the running. They put in a gallant performance nonetheless on the final day, triumphing in their group to place ninth overall.

Performing consistently and finishing lower than 10th only three times over the entire Tour, they entered the Super Final in fifth place. But a fiercely competitive conclusive battle meant that fifth place in both the last race and the overall classification was what they had to settle for.

“The reality of us not being on the podium doesn’t come down to that last race.” admitted a candid Morrison. “We lost points earlier in the Tour and if you leave it to the last race there’s an element of chance. We sailed well but we should have banked more points earlier on.”

Abdulkhaman Al Mashari, who has taken over the role of trimmer this year was enthusiastic about the experience: “We learned a lot this year taking on the trimming on the boat. I feel like I’m improving and learning from Stevie and Matt and Thierry all the time. It’s a really good event. Very hard but really fun, you learn a lot and you get to visit some great places.”

The Day Before the Drama