Flying, Crashing, and On Day 2 of European Championship 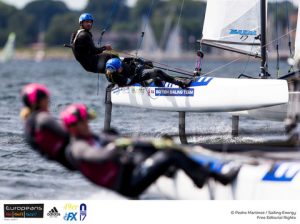 Another sunny, bright, breezy day welcomed the combined Olympic fleets of Nacra 17, 49er, and 49erFX race boats today as the 2017 European Championship continued in Germany’s North Sea port of Kiel.  The 49er and 49erFX entered their second day of competition while all eyes were on the brand new foiling Nacra 17 catamaran sailors on their first day of racing.

Olympic veteran Fernando Echávarri  (Gold, 2008 Beijing) and former 470 World Champ Tara Pachecho showed their ability to adjust to the new boat in the shifty Southwesterly wind of 8-16 knots, taking the lead after three races by just one point over Italy’s Ruggero TITA and Caterina BANTI, newcomers to the Nacra fleet.  Echevarri is anxious to show he’s hunting for gold after a disappointing 11th place performance in Rio, and he and Pacheco are doing their best to get a head-start on the field as they learn the idiosyncrasies of the full-foiling N17.  “Downwind the boat is very fast and the angles are completely different to the old c-board configuration, while upwind provides new challenges,” said the former Tornado helm. “You can tell the fleet is experimenting a lot, but it seems that in this moderate breeze, foiling upwind is very risky unless you are sure you are heading in the right direction. “You sail low and fast when you are foiling, so you lose options quickly if you find yourself on the wrong side of a shift,” he added, adding that traffic becomes a big issue when flying out of the water on an upwind leg.  “It’s another tool in the arsenal, and we’re all rapidly figuring out when to use it.” 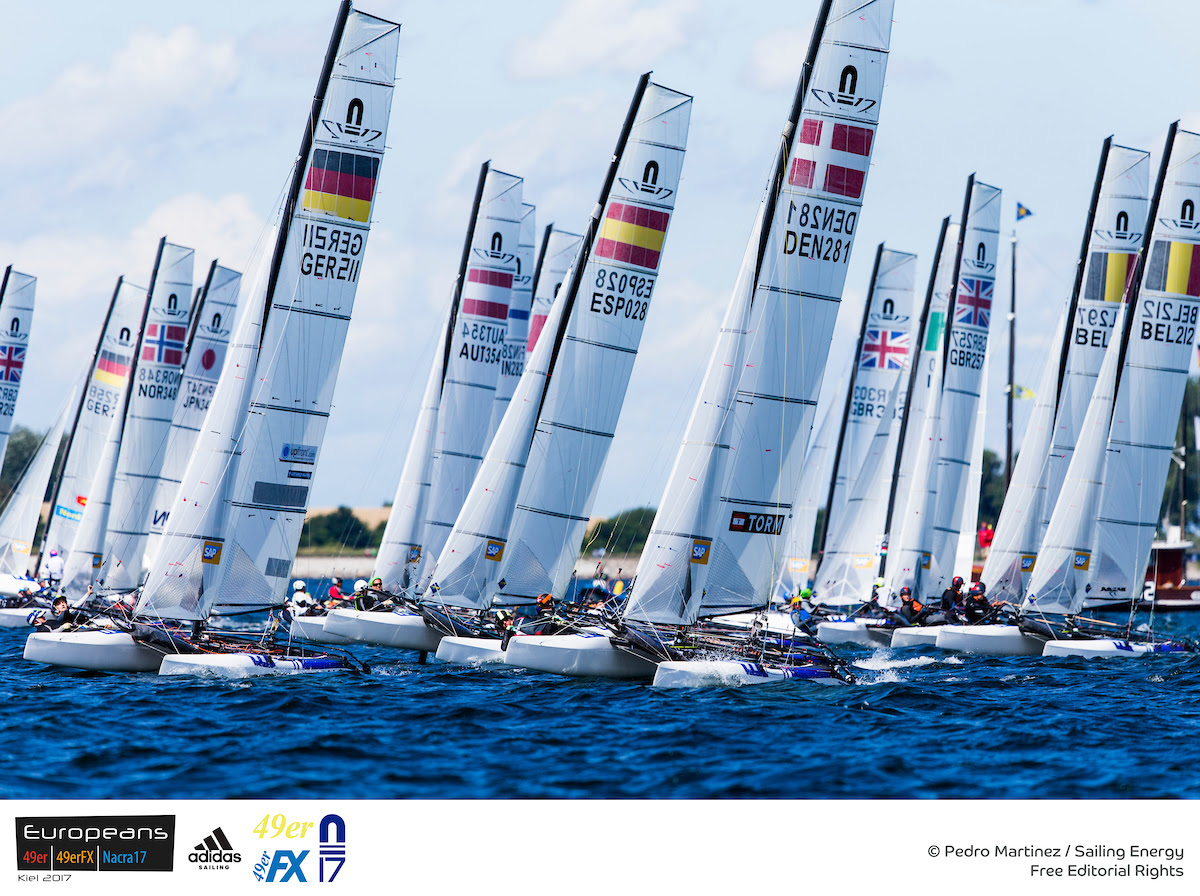 Former British 49er sailor and foiling Moth standout Chris RASHLEY says the Nacra provides a much different experience than monohull foiling.  “There are a lot of different parameters, especially upwind when foiling can provide some interesting tactical options that weren’t available on the old boat,” he said.
Olympic Silver medalist Jason Waterhouse was disappointed to miss today’s action in the Nacra 17 thanks to a training injury, but he took the opportunity to call on coach Darren Bundock to fill in along with Olympic crew Lisa Darmanin.  “It’s not a huge problem, but our priority is the Worlds and it’s just not great to push it right now when rest is the only way to recover,” said Waterhouse, who said it was a great chance to do some recon from a chase boat, as well as to give their coach some time amongst the fleet to do his own experimenting.  One of Australia’s most successful catamaran sailors ever, “Bundy” took some time to get going, pulling a 19 in the first race before a tenth and then an eighth place in the final race of the day. Waterhouse says he may try to take the helm if the winds go light, but he’s making no promises.  “The best way to see how the dynamics and tactics develop is to be out there, so I’m hopeful,” he said.  Today’s full interview with Jason is here.

In the 49er FX, Denmark’s Jena HANSEN and Katja IVERSEN continued their winning ways with a 6,2,3,1 scoreline, but it there was no cruising out there. Crew Iversen said she was mentally and physically drained.  “I’m tired now, it was a tough, four-race day, but not a bang-the-corner type of day,” she said.  “in and out, up and down, always thinking, all day long.”  Iversen said their three-week training session before the Europeans was really good for them, it’s the only sailing they have done since their Bronze medal in Rio. “We really missed sailing in the fleet, maybe that’s why we are sailing so well. We’re having so much fun!”
The European Championship media team spoke to several FX sailors at length during the live morning show; you can listen to their thoughts here. 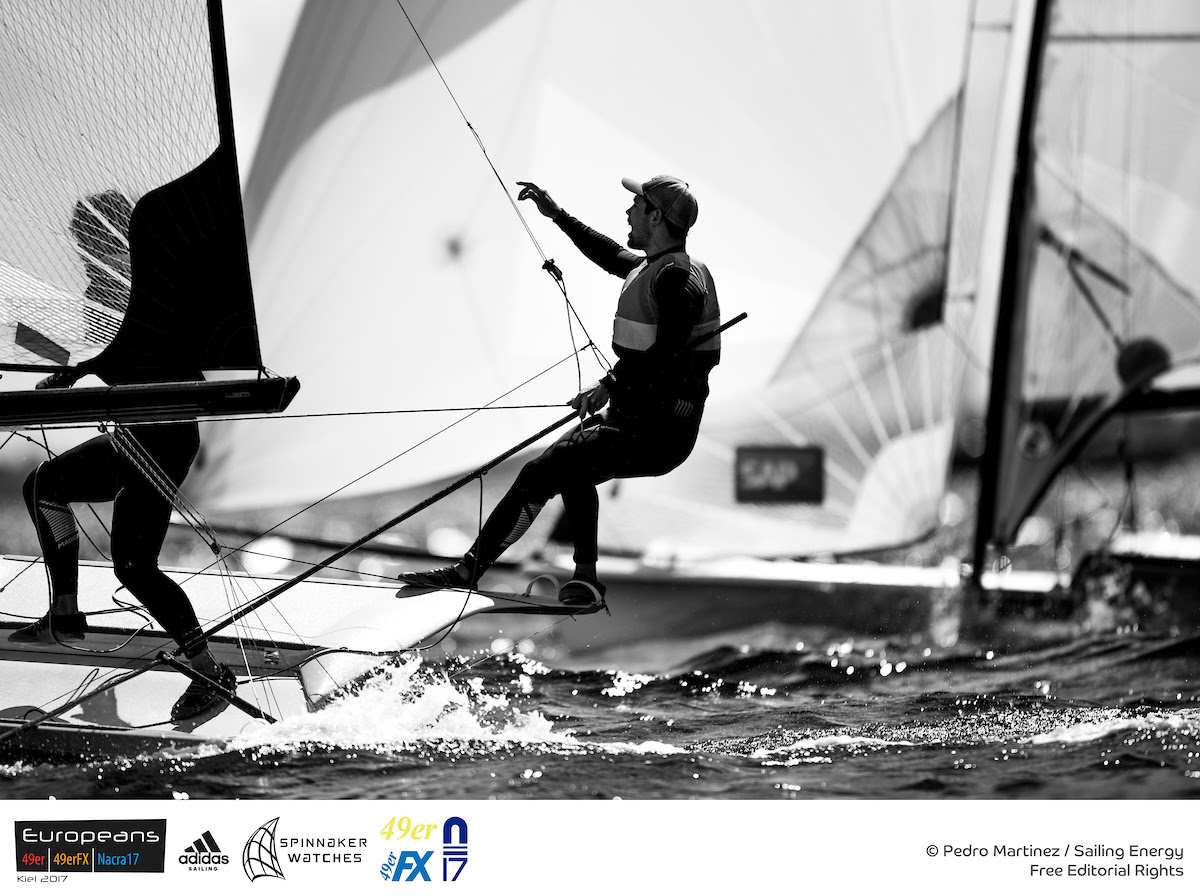 The men’s 49er fleet featured plenty of tight racing – too tight for the Irish team of Ryan SEATON and Seafra GUILFOYLE, who collided with Americans Chris RAST and Trevor BURD during the third race of the day.  “We retired immediately after affecting Chris and Trevor’s race, and we immediately got the boat propped up on the coach boat to see just how bad the damage was,” said Seaton.  Some hasty drying work and a big piece of sticky sail tape over the hole in the boat and they were back out there for the last race, with surprising results. “We had a good start and then sailed the shifts well, it was a good way to end the day,” he said of their 2ndplace finish with a piece of flapping tape on the bottom of the hull.  “Maybe we should try tape on the bottom every day!”  Watch a full post-race interview with Ryan here.

Britain’s Dylan FLETCHER-SCOTT and Stuart BITHELL picked up their first double-digit finish of the week but managed to hold first place for another night, while Austria’s Benjamin BILDSTEIN and David HUSSL fell off the pace in the final two races of the day, sending them back to fourth place.  Meanwhile, GBR’s James PETERS and Fynn STERRITT moved well up the fleet into second, while Western Australia standouts David GILMOUR and Joel TURNER sailing loose and fast to jump into the final podium position with three qualifying races remaining for both 49er fleets.

Tomorrow morning will see the foiling Nacra 17 and the FX hitting the water with a much lighter forecast; who will show their light-air prowess in tricky Kiel?  The 49ers will complete their qualifications in more unstable air in the afternoon, with Gold/Silver fleet racing beginning on Wednesday.

Please be sure to LIKE the Nacra17/49er/FX Facebook Pages (49er Sailing, Nacra 17 Sailing) for the best way to be notified of new photos, videos, and live streams from the European Championship.  You can find more centralized information for interviews, photos, results, articles and other regatta documentation on the class websites (Nacra 17 — 49er and FX)

If you love watching live racing, the real fun begins on Wednesday, when you can watch live streamed racing action from the water, complete with professional commentary, tracking, and much more.  You’ll find the live notifications via our alerts if you sign up.

Capers …“save” the BDI; Geopolitics in turmoil…