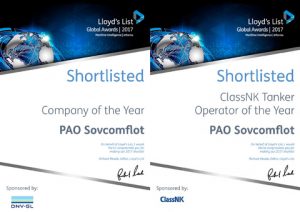 Sovcomflot (SCF Group) has been shortlisted for two important 2017 Lloyd’s List Global Awards, Company of the Year as well as ClassNK Tanker Operator of the Year.

This is the fourth year running that the Group has been a finalist of the Lloyd’s List Global Awards, one of the most respected awards within the international maritime industry. However, this is the first time Sovcomflot has been shortlisted for two different awards, both being among the most important awards on offer. This demonstrates that Sovcomflot’s achievements are highly regarded by the panel of judges.

Winners of the 2017 Lloyd’s List Global Awards will be announced at the ceremony at the National Maritime Museum in Greenwich, London on 27 September 2017.

PAO Sovcomflot (SCF Group) is one of the world’s leading shipping companies, specialising in the transportation of crude oil, petroleum products, and liquefied gas, as well as servicing offshore upstream oil and gas installations and equipment. The Group’s fleet comprises 149 vessels with a total deadweight of over 13.1 million tonnes. The company is registered in St. Petersburg with offices in Moscow, Novorossiysk, Murmansk, Vladivostok, Yuzhno-Sakhalinsk, London, Limassol, and Dubai.

Inmarsat seminar series puts digitisation at the heart of LISW2017