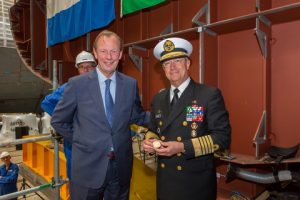 On Thursday 17th August, the Secretary of the Mexican Navy, Admiral Vidal Francisco Soberón Sanz, took part in a symbolic coin ceremony at Damen Schelde Naval Shipbuilding (DSNS) at Vlissingen in the Netherlands. He was accompanied by the Secretary of National Defense, General Salvador Cienfuegos. The ceremony is a part of the shipbuilding process, traditionally aimed at attracting good fortune for a vessel under construction. On this occasion, the vessel is a Damen Sigma 10514 Long Range Patrol Vessel.

The Mexican Navy is a long-standing client of Damen and currently operates no fewer than ten Damen vessels in its fleet. The project for a Sigma 10514 was signed earlier this year. 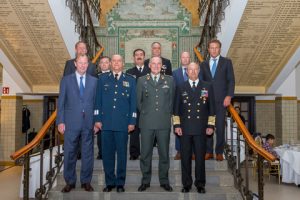 * See full caption at the end of the text

As with the previous Sigma vessels Damen built for the Indonesian Navy, the vessel for Mexico will be constructed modularly, with shipbuilding activities taking place in both the Netherlands and Mexico. Two of the six modules will be constructed at DSNS’ location in Vlissingen, whilst the remaining four will be built at a Mexican Shipyard. Upon conclusion, the six modules will be integrated in Mexico. This way Damen contributes to the development of the shipbuilding capabilities of the Mexican Naval Industry related to control, propulsion, and detection systems.

A Damen spokesperson said of the contract, “We are extremely proud to have been chosen for this high profile project. This vessel will once again demonstrate Damen’s capabilities to build for any country in the world in order to meet client requirements. The Sigma 10514 will play a key role in the Mexican Navy’s plans to modernise its fleet.”

The Sigma 10514 is designed to undertake a wide range of missions. The vessel will allow the Mexican Navy to participate in international exercises, humanitarian missions, and to increase its presence in its territorial waters and Economic Exclusive Zone of the country.