Top Posts
The BDI drops down to 1,540; Wets maintain...
John Faraclas of All About Shipping contributes to...
Irene Rosberg addresses the 22nd Parliamentary Intelligence-Security Forum
Ready to hit the water? So are these...
Coach Fall/Winter 2022: A Collection That Feels Like...
Badgley Mischka Fall/Winter 2022: Wearable Sculpture in Ultra-Chic...
Power, philosophy and heroism of central bankers, and...
New superyacht goes up in flames
American Club Circular no.23/22 – EU Sanctions –...
Hot Port News from GAC
Ulla Johnson Fall/Winter 2022: Organic Forms and Nature’s...
American Club Member Alert (August 12, 2022) re...
Witherbys leads the way in digitisation as 5,000...
Home HRCommunication MHI selected by Inmarsat to launch its first Inmarsat-6 satellite

MHI selected by Inmarsat to launch its first Inmarsat-6 satellite 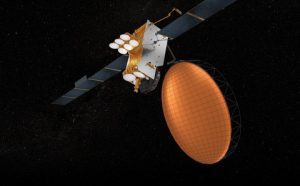 Artist’s impression of the I-6 F1 satellite in orbit

London/Tokyo: 12 September 2017 – Inmarsat (LON: ISAT), the world’s leading provider of global mobile satellite communication services, has today announced that Mitsubishi Heavy Industries, Ltd. (MHI) has been selected as the launch provider for the first satellite in the Inmarsat-6 fleet (Inmarsat-6 F1). The value of the contract has not been disclosed. The satellite, which is under construction by Airbus Defence and Space, is scheduled for launch in 2020 using MHI’s H-IIA launch vehicle.

Inmarsat’s sixth-generation (I-6) fleet will be the first to feature dual-payload satellites; each supporting L-band and Ka-band (Global Xpress) services. The I-6 satellites represent a step change in the capacity of Inmarsat’s L-band services and will support a new generation of L-band capabilities, from advanced global safety services and very low cost mobile services, to Internet of Things (IoT) applications. The Ka-band payload will add further depth to Inmarsat’s Global Xpress (GX) constellation, which began offering high-throughput broadband services worldwide in 2015. Through the I-6’s Ka-band payload, Inmarsat will augment its global coverage with greater depth of capacity in regions of greatest demand. 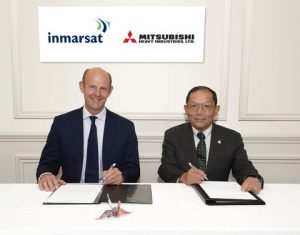 “Inmarsat is delighted to select MHI and its H-IIA launch vehicle for the first of our sixth generation satellites,” said Rupert Pearce, CEO of Inmarsat. “Inmarsat is continually seeking to extend and diversify its ecosystem of partners, particularly in the strategically important area of launch providers. We believe that MHI and its H-IIA launch vehicle offers a world-class service.

“With the development of the new H3 launch vehicle, it is clear that MHI is committed to continuing innovation,” continued Rupert Pearce. “These are attributes that we seek in our partners and we look forward to a long and fruitful relationship with MHI as one of our roster of launch partners.”

“We are honoured to have been selected by Inmarsat, a leader in the global mobile satellite communications industry, to provide launch services. The decision reflects the reliability and on-time delivery of our launches, as well as our highly valued technological expertise,” said Masahiro Atsumi, Vice President & Senior General Manager for Space Systems in MHI. “As with previous launches, MHI will work closely and attentively – in the spirit of omotenashi – with Inmarsat to prepare the specifics of the launch to ensure that expectations are met. We hope to build a strong and lasting relationship with them, and to provide further launch services using our latest H3 rocket in future.”

MHI Launch Services enjoys an extremely high success rate of 97.6% and has provided 35 successful consecutive launches since 2005, delivered on-time and to the customer’s satisfaction. The successor to the H-IIA – the H3 Launch Vehicle – is now being developed by MHI and Japan Aerospace Exploration Agency (JAXA). It will allow even more flexible and cost-efficient launch services, and is scheduled to make its maiden flight in 2020.

The agreement with Inmarsat reflects MHI’s long-term commitment to supporting a wide range of customers in the space industry. MHI will continue to support the development of the space industry, and will seek further new opportunities in this field both in Japan and globally.

Inmarsat will make a decision on its launch partner for the second I-6 satellite in due course.

How Does Arbitration Support London?