IMO Feature – A maritime treaty is adopted or amended – what happens next? 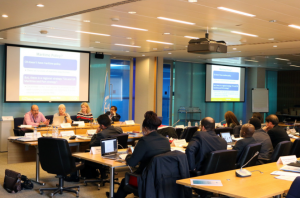 From the legal workshop

Throughout the maritime world, the technical regulations developed and adopted by the International Maritime Organization (IMO) are well known.

Shipmasters and officers, as well as expert trainers and educators, spend many hours getting to grips with the knowledge needed to implement and impart the detailed regulations governing ship safety and security and the prevention of pollution from ships.

But there is an important first step which needs to happen between adopting a new regulation or amendment and its entry into force and application on board ships. Appropriate implementing legislation must be drafted at the national level, because international treaties can only become law when implemented into national legislation. IMO treaties are not self-executing and require domestic legislation to give effect to their provisions.

How to do this was the subject of a recent five-day global workshop (18-22 September 2017) held at IMO Headquarters in London. The workshop was attended by 28 lawyers and drafters from 25 countries.

“We get the seafarers coming up to us, asking ‘how come you have not implemented this?’, ‘where are the regulations?’, ‘where do you derive your authority from?’.

So it is important and imperative for us to ensure that IMO conventions are actually domesticated into our national law,” said participant Jane Florence Otieno, from Kenya.

Participants agreed that the workshop would help them to effectively implement IMO regulations in their countries. “As a lawyer, I need to grasp the most important parts of legislative drafting,” said Trevor Potoura, from Papua New Guinea.

The workshop also provided the opportunity for networking and sharing ideas, particularly with regards to the challenges countries may face in implementing IMO’s technical regulations into national law, including often having to deal with several different government agencies.

“Right now, we have probably eight different maritime agencies that all deal with maritime. And sometimes their roles overlap. So one of the things we have to look at, particularly in writing our laws, is making sure that we know who does what at each point,” said Daffodil Maxwell, from Trinidad and Tobago.

IMO’s Head of Legal Affairs, Dorota Lost-Sieminska, said the workshop aimed to provide participants with the tools necessary to ensure effective, national, implementation of IMO treaties, with particular attention to the implementation of amendments adopted through the tacit acceptance procedure.

“IMO has always provided extensive training for technical experts. However, to give effect to the technical provisions, national implementing legislation needs to be drafted and adopted.

And this is why IMO offers this intense five-day training for lawyers -to provide participants with the tools necessary to understand treaties and their amendments – how they are developed and adopted, and how to implement them into the national legislation.” she said.