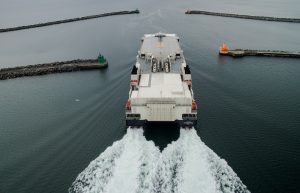 Ferry Officers to be Balloted for Industrial Action

Stena Line officers could be balloted for industrial action unless the company starts to engage in meaningful negotiations over a threat to UK seafarers’ jobs on its North Sea services, the maritime professionals’ union Nautilus International has warned.

Members attending the Union’s UK branch conference in Hull voted unanimously in favour of an emergency motion tabled by the national committee expressing concern about the ‘unacceptable position’ taken by the company in handling the impact of the withdrawal of the UK-flagged freight ferry Capucine.

Both Capucine and the Dutch-flagged sistership Severine were due to be replaced by two Finnish-flagged time-chartered vessels on the Harwich-Europoort freight service when their bareboat charters come to an end in January 2018.

‘This against a backdrop of UK seafarers serving on this route for more than 15 years, far longer than any other nationality,’ the motion notes.

The conference welcomed the fact that jobs have been saved in the Netherlands, but deplored the employer’s ‘discriminatory behaviour towards UK seafarers’ – noting that while Nautilus began discussions and consultation with the aim of protecting UK members’ jobs and, whilst Stena BV has reversed their decision on Dutch manning, the UK management maintains its stance that potential redundancies for UK officers still remain.

The motion also expresses concern that the employer’s actions are not in compliance with UK and EU employment law and calls on the Stena Group to ensure that its UK employees receive the same treatment and consideration as Dutch employees.

The conference stated its support for ‘the necessary action required, both industrial and legal’ to ensure that Nautilus members in the UK are treated the same as their Dutch colleagues operating on the same route and called on the union to ‘explore all legal avenues to ensure, if the law provides for members to lodge claims for discriminatory actions, the protection of TUPE and failure to apply redundancy criteria’.

The conference warned that if the company does not engage in meaningful negotiations with the union, ‘then Nautilus International will consider that a dispute situation has arisen and ballot its members for industrial action in addition to pursuing all appropriate legal avenues’.

Nautilus general secretary Mark Dickinson commented: ‘This is an extremely serious situation and our members have made it very clear that they will not tolerate the company playing one side of the North Sea seafarer workforce against the other side. Equal treatment should prevail on both sides of the seaway, and the company must beware of the risks it runs by failing to treat its UK staff fairly.’