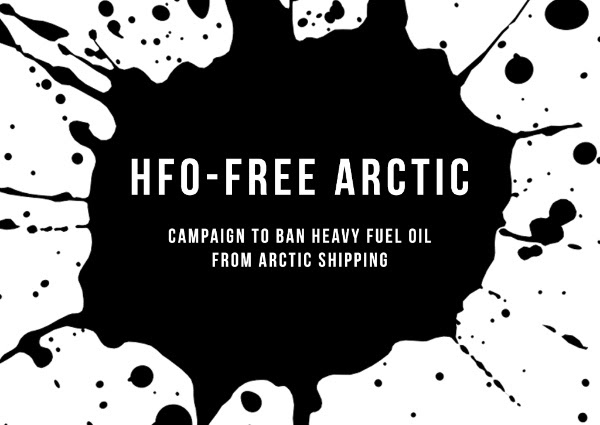 Malta, October 9th, 2017:-  The Our Ocean conference in Malta was the venue for the launch of an an international initiative to end use of heavy fuel oil (HFO) by Arctic shipping. On Friday, October 6th, as one of the ambitious commitments made during the conference, the Our Ocean Arctic Commitment was launched to expand collaboration between the cruise industry, environmental NGOs and indigenous communities, in order to protect the Arctic environment, its wildlife and its peoples.

The threat of a heavy fuel oil spill not only poses a severe risk to Arctic ecosystems, but burning it as marine fuel is contributing to increased ice melt in the Arctic. HFO has already been banned in the Antarctic because of the risks it poses to vulnerable, fragile ecosystems and to wildlife, and because of the difficulty in responding to a spill in remote locations.

The Our Ocean Arctic Commitment multistakeholder collaboration for a HFO free Arctic brings together the Clean Arctic Alliance (international NGO partnership), the Eyak Preservation Council (Alaskan social change organisation), Hurtigruten (expedition cruise operator) and the European Climate Foundation (philanthropic foundation). The Our Ocean Arctic Commitment follows the January 2017 launch of the “Arctic Commitment”, which has already been signed by more than 50 leading Arctic companies, polar explorers, indigenous groups, NGOs and political figures and aims to increase the awareness and grow support for the Arctic Commitment – a commitment to ban the use of the most polluting of shipping fuels in Arctic waters.

“Following the success of the Arctic Commitment since we launched in Tromsø in January, and recent commitments made by IMO member states regarding measures to mitigate the effects of heavy fuel oil at MEPC71, we are honoured to launch this new commitment at Our Ocean, calling on  industry, environmental NGOs and indigenous communities to join us in working towards an eventual Arctic ban on use and carriage of shipping’s dirtiest fuel”, said Dr Sian Prior, Lead Advisor to the Clean Arctic Alliance.

“Our Alaskan community was the ground zero for the devastating impacts of the 1989 Exxon-Valdez oil spill- the harmful effects linger to this day”, said Carol Hoover, Executive Director of the Eyak Preservation Council. “A dangerous heavy fuel oil (HFO) spill would be catastrophic and forever life changing for the people who depend on their pristine habitat. We need to do everything we can to prevent this from happening in the Arctic marine environment.

“The use of heavy fuel oil (HFO) has already been banned in the Antarctic, now it’s time to ban it in the Arctic as well”, Daniel Skjeldam, CEO of expedition cruise operators Hurtigruten, which does not use heavy fuel oil in any of its ships, and co-sponsors the Arctic Commitment. “The shipping industry must be frontrunners in promoting regulations that will secure sustainable Arctic growth”.

“An accident involving a mega ship and spill of heavy fuel oil in the Arctic would represent an environmental disaster”, continued Skjeldam. “If heavy fuel oil is spilled in cold Arctic waters, it will have larger consequences than anywhere else. The Arctic deserves sustainable growth and innovation, and the industry needs to move first. Hurtigruten is proud to present the Arctic Commitment to the attention of the Our Ocean conference”.

The objective of the initiative is to expand the “Arctic Commitment” to over one hundred leading Arctic voices, in order to:

The IET launches ‘Engineering the Next Generation’, in collaboration with ITN Productions