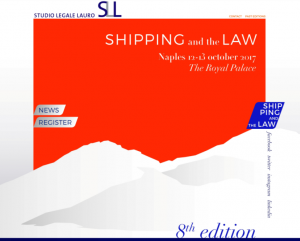 The eighth edition of the international conference Shipping and the Law, organised by Studio Legale Lauro, will take place on the 12th and 13th October 2017 on the stage of the eighteenth-century Court Theatre of the Royal Palace of Naples.

The conference will include the presence of a number of leading figures among ship-owners, bankers, maritime law experts, insurers and other players of the shipping sector from around the world and feature a Gala Dinner by invitation in the Royal Apartments of the Palace for the conference and the Speakers, Delegates, and the Authorities, hosted by CR MAG and SMIT.

The conference procedings will be officially opened on Thursday 12th October followed by a welcome from maritime lawyer and conference organiser Francesco S. Lauro. It will be followed by a roundtable titled “Full Steam Ahead in the Age of Uncertainty” on important challenging topics, among them ‘The threats and the opportunities for European operators in relation to the rise of the maritime economic power of China and other countries of the Far East’, ‘How can the maritime world deal with the global warming’, ‘The future of shipping in the age of growing protectionism or uncertainty created by Trump, Brexit and new political movements’.