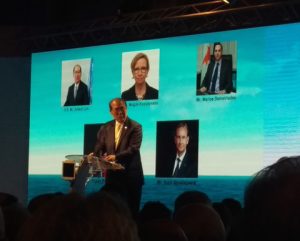 CYPRUS, October 9, 2017: today marked the opening of the internationally renowned “Maritime Cyprus 2017” Conference at the “Evagoras Lanitis Centre” in Limassol.   Organised by the Ministry of Transport, Communications and Works, the Department of Merchant Shipping, the Cyprus Shipping Chamber, and the Cyprus Union of Shipowners, this year’s event – “Yesterday’s World, Tomorrow’s Today” – is attended by distinguished speakers and more than 850 shipping personalities from around the world.

In his Opening Address, the President of the Republic of Cyprus Mr. Nikos Anastasiades, referred to the Cyprus shipping sector as the only sector in Cyprus whose size goes far beyond the size of Cyprus as a country and that Cyprus Shipping holds a privileged position on the world’s shipping map. Cyprus has established itself as a respectful maritime flag and as a base for international shipping operations, offering a favourable regime for foreign investors. Cyprus is one of the fastest growing economies of the European Union whereas foreign direct investment has significantly increased. The shipping sector has been catalytic to the recovery of the Cyprus economy. Shipping and its sustainable growth is thus one of the main concerns and priorities of the Cyprus Government, the President mentioned. The President referred to the need to focus on the future of the Cyprus shipping sector in order to safeguard its steady and substantial growth. The President announced the materialisation of the Cyprus Government’s commitment to establish an independent Deputy Ministry for Shipping. The new Deputy Ministry will start functioning as from 1st March 2018.

A discussion followed on “Future Shipping Strategy: Regulators vs. Industry”. This debate was moderated by the Minister of Transport Communications and Works, Mr. Marios Demetriades. Keynote addresses were delivered by Mr. Kitack Lim, Secretary General of the International Maritime Organization and Mrs. Magda Kopczynska, Director of DG Move of the European Commission, on behalf of Mrs. Violeta Bulc, Commissioner for Transport of the European Commission. Mr. Kitack Lim and Mrs. Magda Kopczynska participated in the panel discussion together with Mr. Esben Poulsson, Chairman of the International Chamber of Shipping and Mr. Niels Smedegaard, President of the European Community Shipowners’ Association. Views were aired on the future challenges for commercial shipping, with the importance of intensifying cooperation between all players in the maritime sector, ensuring a level playing field, and preparing today the shipping of tomorrow. All panellists agreed that they do not see there is as a question of “regulators versus industry”. There is a long and successful history of regulators and industry working together to achieve common, shared objectives; objectives which, if achieved, will have a beneficial and positive effect not just on the industry but far beyond. It was stressed that the regulators need to be more proactive and the speed of adapting to technological developments should increase. One of the main challenges identified was the decarbonisation of the maritime sector. Particular reference was made to the ambitious efforts made jointly by the regulators and the shipping industry to reduce carbon dioxide emissions. Views were exchanged on the discussions currently underway at the International Maritime Organization (IMO) regarding the development of a global strategy that will set the percentage by which the sector’s total carbon dioxide emissions should decrease. It was mentioned since shipping is a global issue, the IMO remains the most appropriate forum. Among the points raised was that future shipping legislation should establish requirements for the use of technology that is already effectively available to the industry and not within laboratories.  An environmentally sustainable industry also needs to be economically sustainable. The need for the development of alternative fuels and new propulsion systems in order to potentially lead to a zero carbon future was also expressed.  The industry’s commitment to a low carbon future was noted as well as its desire for an even better approach to maritime legislation, building upon the comprehensive global framework already provided by the IMO. Another challenge referred to was digitalisation. It was noted that the automation of shipping is already becoming a reality and will accelerate in the years to come with the advantage of enhancing navigational safety and making operations more efficient. It was further noted that the challenge of cybersecurity also needs to be planned today.

The second panel discussion took place on “Tanker Owners; An Endangered Species?”. Mr. Themis Papadopoulos, President of the Cyprus Shipping Chamber moderated the discussion with fellow panellists Mr. Robert Burke, CEO of Ridgebury Tankers, Mr. Rob McLeod, Head of Risk Marketing of Hartree Partners Advisory Services UK Limited and Mr. Kevin Oates, Managing Director of Marine Money Asia Pte Ltd. The discussion focused on whether the tanker owners are facing an endangered future. The panellists analysed the fact that although the demand for oil is changing due to the shift to renewable sources of clean energy, the need for transporting crude oil and oil products with tanker vessels will not extinct and this is highly unrealistic, at least not for the next 25 years which is the life span of the tankers built. It was mentioned that it is not possible that the world will no longer need crude oil and clean products or that oil will be able to be transported from source to consumption without using tanker vessels. The West may pursue more enthusiastically the move to renewable energy but the demand for oil will increase in Asia, Africa and other emerging economies of the world. It was noted that routes and trades may change dramatically going forward and the tanker fleet size may need to be adjusted to fit changes in demand.  The importance of the environment protection was stressed but so was the need to fulfil the basic economic needs in the emerging economies of the developing countries. The panellists concluded that tanker owners are vulnerable but certainly do not constitute an endangered species. They noted that they anticipate an improvement in the market. Maintaining a balance between supply and demand is essential for ensuring a bright future for tanker owners.

The day’s third and final panel discussion explored “What does the future hold for Shipowners”. Mr. George Mouskas, Member of the Executive Committee of the Cyprus Union of Shipowners was the moderator for this discussion with the panel comprising Mr. Andreas Hadjiyiannis, President of the Cyprus Union of Shipowners, Mr. Panos Laskaridis, CEO of Lavinia Corporation / Laskaridis Shipping Co Ltd and Mr. George Procopiou, Chairman of Dynacom Tankers Management Ltd. The panellists mentioned that the market is improving and that the very bottom ship prices belong to the past. There is a substantial increase in the dry cargo ships’ rates and a slight increase in the rates for container ships thus the future looks promising. The supply and demand of bulk carriers seem satisfactory. Shipowners are not discouraged from ordering new ships but they should do so prudently and wisely. It was noted that the preceding year was a record year for scrapping of ships whereas the following year will be a record year for lowest deliveries of new ships. The impact of the Chinese economy on the profitability of the shipping industry was analysed whilst it was noted that the Indian economy is also experiencing an impressive growth. The ship finance parameters were analysed and it was stressed that shipping is a name lending industry. The reluctance of European and American banks to finance shipping has created a vacuum that was taken over by Chinese banks. Nevertheless, banks are slowly making funds available. Once better rates are made available, there will be ample ship financing. Finally the importance of innovation was highlighted and so was the existence of quality focused services.

The Conference, organised biennially in Cyprus, is taking place this year for the fifteenth time since 1989. It also combines the “Maritime Services Exhibition”, in which more than 40 exhibitors participate.

The IET launches ‘Engineering the Next Generation’, in collaboration with ITN Productions