Maritime Cyprus 2017: Highlights from speeches and panel sessions on the second day 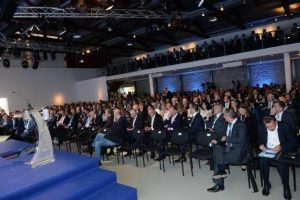 CYPRUS, 11th October 2017: The second day of the “Maritime Cyprus 2017” Conference successfully kept the momentum that was experienced during the previous day. Hundreds of distinguished participants from around the world followed the proceedings of the second day of the Conference, solidifying its reputation as one of the most successful shipping conferences worldwide.

The first session of the day, “The cost of smoke”, was moderated by Mr. Ioannis Efstratiou, Acting Director, Department of Merchant Shipping, Ministry of Transport, Communications and Works of the Republic of Cyprus. The panel was comprised of Mr. Georgios Christofi, Head of Environment & Capacity Building Unit of the European Maritime Safety Agency, Mr. Tony Paulson, Chairman of the Pollution Committee of the International Group of P&I Clubs, Mr. Peter Hinchliffe, Secretary General of the International Chamber of Shipping and Mr. Philippe Baumans, Hull Panel Chairman of the International Association of Classification Societies.

This panel’s debate focused on the air pollution burden imposed by shipping, which in recent years has led to an upsurge of international, regional and national regulations. Some of these regulations will enter into force in the near future, while others are still being developed. The panel discussed how greenhouse gas emissions, particularly CO2 and SOx, is the key environmental issue in shipping today. Panelists referred to the implementation of the EU’s Monitoring, Reporting and Verification (MRV) regulations for reporting CO2 emissions from large ships using EU ports. During the debate, panelists agreed that Liquefied Natural Gas (LNG) is maybe the fuel of the future since it significantly reduces air emissions. From the insurance perspective, it was noted that greener ships will not automatically get a discount in premiums, as this is based on claims records. However, a less efficient ship has a higher probability of having a less favourable claims record. Thus, there are indirect incentives on insurance with respect to sustainable shipping. It was noted by the panelists that the shipping industry is prepared to take responsibility for its air emissions, but that it should not take more than it’s fair share of responsibility for global warming. The panelists highlighted that climate change and environmental protection require a global response, particularly when dealing with actions from the shipping sector. Maritime transport is widely recognised as an environmentally sustainable and energy efficient mode of transport.

The second panel of the day focused on “Smart Shipping”. Mr. Anastasios Papagiannopoulos, President of BIMCO was the moderator for this discussion, and the panel was comprised of Dr. Steffen Gau, Marine Business Development New Construction of Lloyd’s Register Marine and Offshore, Mrs. Cynthia Hudson, CEO of HudsonAnalytix, and Mr. George Ward, Project Support Manager of ECDIS Ltd.

On novel ship design, it was mentioned that newly designed ships have innovative equipment onboard that make ships more efficient. This equipment will reduce the  environmental impact of these new ships. The panel discussed the role of the shipowners during the design stage, and the role of the classification societies during the building stage of new ships. With regard to digitalisation, it was emphasised that the industry needs to be ready to embrace its benefits and prepare for the threats it poses, particularly cyber security. The importance of preparing crews for future technologies through training was highlighted. It was proposed that autonomous ships will become a reality, but that we should not expect to see unmanned ships for many years to come as seafarers cannot be directly replaced by potentially vulnerable digital systems. Regarding cyber security, it was stressed that cyber risk is here to stay for both companies and ships, but that cyber risk management is possible and achievable. Therefore, the shipping industry should take protective measures to be ‘cyber mature’, particularly as personal, confidential and operational information is at risk. The shipping industry constitutes a target for cyber attacks since a lot of information and money is at stake. It was noted that cyber security sustainable investments should be made, and that the level of cyber maturity should be continuously reinforced as managing the risk needs to be a continuous improvement process.

Stay put with the BDI’s rise… there is a long way to go!