Safe navigable area at the Port of Durban increases 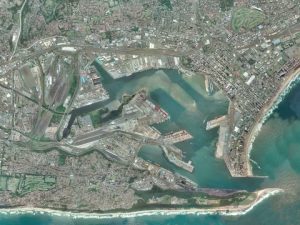 [DURBAN, South Africa, 12 October 2017]  Following disruptions caused by inclement weather at the Port of Durban on 10 October 2017, which resulted in only 80% of navigable area declared safe by last night, progress has been made in clearing obstruction on the seabed. This brings the total port area that is safe for navigation of vessels to 95%, as at 16h00 today.

The latest results of the sounding surveys that were conducted indicate that there is no obstruction on the seabed that could pose risk to navigation along the Durban Container Terminal: Pier 1. However, sounding surveys are still in progress along the C-Shed area and in the interest of ensuring safe navigation of vessels, vessel movement is still suspended in this area.

Transnet National Ports Authority’s focus still remains on continuing with the implementation of the recovery operations and supporting terminal operators to restore normality.