Regulating ship speed could cut emissions by a third – study 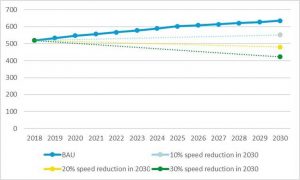 Greenhouse gas emissions from three ship types – containerships, bulkers and tankers – could be reduced by a third, on average, by reducing their speed, according to a new independent study that will be presented to the International Maritime Organisation (IMO) next week.  The cumulative savings [1] from reducing the speed of these ships alone could, by 2030, be as much as 12% of shipping’s total remaining carbon budget [2] if the world is to stay under the 1.5ºC global temperature rise, the CE Delft study for NGOs Seas At Risk and Transport & Environment, founding members of the Clean Shipping Coalition (CSC), found.

Reducing operational speed would also provide a boost to jobs and growth in shipbuilding nations, where the study concludes production would have to grow by over 30% in order to maintain transport capacity for global trade. The study also concludes that the additional costs of slow steaming on exports such as oilcake and beef from Latin America would be marginal, and this without accounting for lower transport fuel costs [3].

Bill Hemmings of T&E said: “Shipping is the only international sector that has yet to commit to a global emissions reduction target or measures. Talks at the IMO are expected to be challenging as the industry body, ICS, is on record as opposing every reduction measure so far put forward – including binding reduction targets, the need to tighten design standards or have operational efficiency measures. But industry itself showed clearly that slow steaming works. It proved effective in weathering the economic crisis, so the IMO should now agree mandatory speed measures to achieve substantial emissions reductions needed to start decarbonisation.”

The analysed ship types cumulatively account for around 52% of global shipping’s carbon footprint. Substantial additional savings will be made when the speed of the remainder of the fleet is also reduced.

The findings will be discussed by the IMO next week when it meets for the second time to develop its initial 2018 greenhouse gas reduction strategy. The UN discussions in London will concentrate on a global emissions reduction target and potential measures for the sector. Regulating ship speed is one of the short-term measures on the table that can be implemented immediately. The IMO is under huge pressure to deliver an effective and adequate response to the Paris agreement and global climate efforts.

John Maggs of Seas At Risk and President of Clean Shipping Coalition: “A new regulation to reduce ship speed will be key to the success of the IMO GHG strategy. Only reduced speed can give the fast, deep short-term emissions reductions that are needed for shipping to meet its Paris Agreement obligations. Significant early emissions savings are essential for the long-term decarbonisation of the sector as they preserve shipping’s carbon budget and buy the industry time to develop longer-term decarbonisation solutions. Recent suggestions by industry that no new short-term measures are needed is misguided and reckless, and threatens to undermine the IMO strategy right from the start.”

[1] Cumulative emissions reductions from a 30% speed reduction amount to over 2.5Gt between 2018-2030. This would put shipping emissions on a downward path even in the absence of other measures.

[3]  It takes on average 22 days to transport oilcake from Buenos Aires to Rotterdam via bulk carriers. With slow steaming the journey would take up to 9 days longer, leading to additional expenses (associated with additional sailing days) by up 0.31%. The impact of these additional costs on Argentinean GDP would be insignificant, amounting to no more than a tenth of a percent of the GDP of South American countries. It is unlikely that other countries would experience higher impacts. However, since slow steaming would also reduce fuel costs, net additional expenses could be zero or negative for shipowners. Similarly, if these savings were passed on to the price of exported oilcake sold in Europe, slow steaming would lead to an insignificant impact on Argentinean GDP.