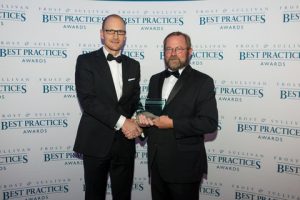 I-Tech AB has been recognized as the technology innovation leader in the European marine biocides market, resulting in the company receiving the 2017 Technology Innovation Award from Frost & Sullivan.

Each year, Frost & Sullivan presents this award to the company that has developed a product with innovative features and functionality that is gaining rapid market acceptance. Based on its recent analysis of the European biocides market, Frost & Sullivan found that the long-term environmental and economic benefits of using I-Tech’s unique bio-repellent antifouling ingredient, Selektope®, make it a truly innovative technology in the European marine biocides market. According to Frost & Sullivan, the solution has the potential to induce transformative change in the marine industry.

Afia Allapitchai, Frost & Sullivan research analyst, commented: “I-Tech AB is one of the few companies in the European market to offer a sustainable marine biocide technology at cost-competitive prices on a commercial level. With rising concerns about preserving the marine ecosystem, Frost & Sullivan expects that the technology will become the trendsetter in the European marine biocides market in the coming years. The diverse range of vessel parts and marine applications that can be protected using Selektope® is far more extensive than those of competing technologies, illustrating I-Tech’s superiority in the marine biocides industry.”

Philip Chaabane, I-Tech CEO, commented: “I-Tech is honored that Selektope’s ® contribution to added performance in marine antifouling coatings is gaining increasing recognition due to its first-of-its-kind mode of action as a biocide and the impact it is having on the market. The Frost & Sullivan Award is an important acknowledgement that Selektope® has established a recognized position in both the European biocides market and in the maritime industry.”

Selektope® is an organic, non-metal compound with unique marine antifouling application. Its bio-repellent mode of action inhibits barnacle settlement on ships’ hulls by stimulating the barnacle larvae’s swimming behavior with reversible effect. It is characterized by high efficacy at extremely low concentrations in a marine coating (0.1% w/w), ultra-low leaching, and flexibility to boost copper-based paint formulations or replace copper completely.

Approved by European, Japanese, South Korean, and Chinese and regulatory bodies progressively through, Selektope® has been used in a series of newbuilding and overcoating projects with more than 150 ships coated with Selektope®-containing antifouling products to date.

The first branded marine coating products to feature Selektope® were launched by Chugoku Marine Paints, Ltd. (CMP) in 2016. CMP’s new generation SEAFLO NEO range of antifouling products make the Selektope® solution available as a high-performance product for mainstream operations, under two separate brands: SEAFLO NEO CF PREMIUM and SEAFLO NEO-S PREMIUM. The latest product, launched in June 2017, was CMP’s SEAGRANPRIX 880HS+, which is based on hydrolyzing technology and can be applied to deep sea-going vessels trading worldwide in-service periods for up to 90 months.