“AMERIKA SQUARE “ – A Greek film with Oscars and Golden Globe aspirations in 2018.

Marblemen Productions, a nascent Greek owned independent film production company, headed by George T. Lemos and Nikkos J. Frangos, is proud to have produced the feature length film, Amerika Square (ΠΛΑΤΕΙΑ ΑΜΕΡΙΚΗΣ) which has been submitted by Greece for an Academy Award (Oscar) nomination in the category of “Best Foreign Language Film”. It has also been invited to compete for the Golden Globes award for “Best Foreign Film”.

Based on a novel by Yiannis Tsibras, written and directed by Yannis Sakaridis and starring Yannis Stankoglou, Makis Papadimitriou, Themis Bazaka and Vassilis Koukalani with an original score by Minos Matsas, the film charts the intersecting fates of three people living in an Athens housing complex: a local tattoo artist, a Syrian refugee from Aleppo and a banal xenophobic nationalist. What plays out between them is a bracing, morally complex look at the human side of the immigration debate. 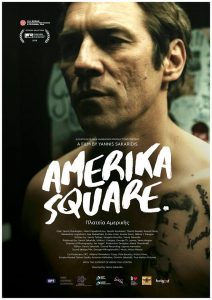 Greece’s record in this Academy Award category is strong. Although it has not yet won this coveted statuette, it has been nominated five times since 1957, the most recent being in 2010 with George Lanthimos’s Dogtooth.

Ninety two countries have submitted their films for this category, of which the members of the Academy will choose a nine-strong shortlist and eventually the final five nominees for the “Best Foreign Language Film” Academy Award. The five official nominees will be announced on 23rd January, 2018, and the 90th Academy Award (Oscars) Ceremony will take place on 4th March, 2018. The Golden Globes nominations will be announced on 11th December, 2017 and the award ceremony will take place on 7th January, 2018.

The film has received an enthusiastic response from Asia to the West Coast of the USA. Amid the Trump presidency, the Academy has strong reasons to show that it represents the progressive face of the United States. By exhibiting a film from a strategically geopolitical country in the Mediterranean, such as Greece, which deals with the refugee crisis (the world’s most important issue after the war in Syria), the Academy will appeal to the collective unconscious of the progressive professionals of the powerful film industry, the majority of which publicly declared their support for Barack Obama. There is a firm belief that if  Amerika Square is  visible enough to members of the Academy, it will be selected as one of the final five Oscar nominees.

Since its world premiere at the Busan (South Korea) International Festival in October 2016, the film has been shown in international festivals (Chicago, Beijing, Thessaloniki, Calcutta, Los Angeles, Trieste, Burgos amongst others), winning special jury and major awards such as the Audience Awards at the 7th Beijing Film Festival and the FIPRESCI (International Federation of Film Critics) Award at the 57th Thessaloniki International Film Festival, along with “Best Film” awards in Trieste, Los Angeles and Bulgaria and “Best Screenplay” in FYROM (Former Yugoslav Republic of Macedonia). It also won “Best Editing” at the Hellenic Academy Awards in 2017. The film was released in Greece on 23rd March 2017. 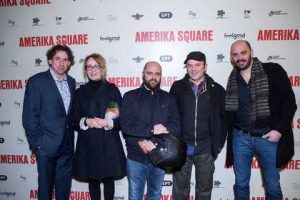 The film’s Hollywood campaign is on-going and the PR Team of KallistaPR and Manos Public Relations (both American Greeks) are working tirelessly to promote and market the film to the Academy Award members and to the Hollywood Foreign Press Association. The U.S. Distributors are Corinth Films and it will be released in America in February 2018.

The Hellenic Centre in Paddington Street, London W1 will be hosting two special screenings of the film on Sunday 25th February 2018 followed by Q&A sessions with the producers, director and actors from the film. For further details, please visit www.helleniccentre.org

If you wish to support the campaign and join ‘Team Amerika’, please contact Marblemen Productions by visiting their website www.marblemenproductions.com  They are proud to be flying the Greek flag in Hollywood and would welcome your patriotic support and involvement.

If you wish to find out more about the film, please visit the official website www.amerikasquare.com for interesting facts, the director’s views and a brief trailer.

Amerika Square handles the sensitive, hot-topic subject of immigration in a masterful and entertaining story and we wish it all the best for the USA Awards Season 2018.