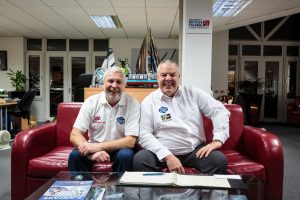 Team Britannia has announced that logistics experts GAC will now be supporting the 80ft powerboat and its 12-strong crew with their environmental programme and land-based activities, as well as the bunkering and storage services they originally signed up to provide last year.

Mr Priddy commented: “I am over the moon that we’ll be working even more closely with GAC on smashing the world powerboat record. They are taking on everything from clearing immigration along the route to managing the water samples and other environmental data we will collect on our 23,000 nautical mile voyage.”

Mr Poole added: “We are under no illusion that this world record attempt is as much won on the land as it is the sea. We have been supporting Team Britannia for well over a year now, but as we’ve got closer to the launch, it has become increasingly apparent that our expertise, global network and resources could be beneficial in areas beyond fuel, storage and smooth transits through the Panama and Suez Canals. Now we’ll also be ensuring that the boat is provisioned quickly, all crew are in the right place at the right time, all the paperwork is complete and the project’s land-based activities are delivered on time, on budget.”

“As Official Logistics Provider of the Volvo Ocean Race and a keen supporter of the UN Environment’s #cleanseas initiative, GAC UK is particularly looking forward to supporting Team Britannia’s environmental programme to raise awareness of the damage being caused to the world’s oceans by plastics. The scale of this problem is huge, with estimates suggesting nearly 13 million tons of plastic are entering the sea every year. That’s equivalent to a rubbish truck full of plastic being emptied out every second – so by 2050, there will be more plastic in the sea than fish.”

Team Britannia are planning a programme of activities at each of their stops, including engaging with young people about the damage being caused to the marine environment by pollution and how this is killing around 100,000 sea mammals and many more fish and birds a year, not to mention the effects on human health as a result of plastic in the food chain.

The news of GAC’s increased support comes just two months after the announcement that British sailing legend Alan Goodwin (80) has joined the team as Land Director. The former Royal Navy Submariner took part in the first round the world powerboat record attempt in 1998 as a crew member of Cable & Wireless Adventurer.

Team Britannia will use a boat designed by Professor Bob Cripps, former Technical Director of VT Halmatic. It will slice the waves, rather than surfing them, with its super-efficient design, a variant of the “fast displacement hull.” This reduces fuel consumption by up to 30 per cent, and should make the 23,000 mile trip smoother.

In addition to the fuel-efficient design, the vessel will be powered by a revolutionary fuel emulsion developed by Clean Fuel Ltd, a mixture of diesel, water and emulsifier that when burnt reduces harmful emissions such as particulate matter and NOx.

Construction of the 80ft RIB boat is well under way on Hayling Island, near Portsmouth, at the Aluminium Boatbuilding Company. The hull was completed and turned last year and the installation of the six massive fuel tanks is well under way. Once fitted, the next job will be to install the engines and jets before the wheelhouse is craned into place.

In total there are more than 2,300 pieces of metal that will be welded together by master boatbuilder Paul Johnson and his team.

Mr Priddy concluded: “I want to say a huge thank you to GAC UK’s Marine Leisure Logistics team who have supported us over the last 12 months or so. When I started to put the team together that will smash the world record, I knew that getting the land team and logistical support right was crucial. In GAC we have a partner that not only gets what we are trying to achieve, but most importantly will deliver. It really is no exaggeration to say that we can lose this on the land, so having a crack team can mean the difference between getting the record and not.”

The boat will be launched in either late 2017 or early 2018, and will then commence sea trials, which will include sailing round Britain, and London to Monaco.

After Monaco, the boat will travel to Gibraltar, for a final programme of sea trials. At this point the boat will be “stripped” of all luxury items.

Finally after a fortnight long nautically themed festival in Gibraltar, Team Britannia will set off on their 23,000 nautical mile world record attempt from the famous racing mark at Europa Point.

Team Britannia is a multi-million pound British bid to design and build the fastest and most fuel-efficient semi-wave slicing powerboat to circumnavigate the globe for the much-coveted UIM world record, currently held by the New Zealander Pete Bethune at 60 days 23 hours 49 minutes.

The boat is a completely new design from Professor Bob Cripps, former Technical Director of VT Halmatic. It has been designed in the UK and will be constructed in the Portsmouth area out of marine-grade aluminium. It encompasses “an exceptionally efficient hull,” which will cut fuel consumption by up to 30 per cent.

The boat is being built by the Aluminium Boatbuilding Company based in Hampshire, out of marine-grade aluminium. The metal was produced by Blackburns Metals and laser-cut by specialist firm Aalco in Southampton.

Team Britannia will launch their record bid in 2018 from Europa Point in Gibraltar.